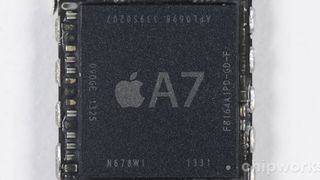 Want some dip with that Samsung chip?

When Apple announced the iPhone 5S 10 days ago, it revealed a more powerful next-gen processor was ticking along for the ride.

The 64-bit ARM A7 was a widely expected edition to the Apple SoC line-up, and some thought Apple might finally turn to a chipmaker other than arch-rival Samsung to produce the silicon in its new flagship.

Alas, Apple apparently couldn't cut the cord, as research firm Chipworks confirmed through "early analysis" that the chip is the product of Samsung's fabrication Foundry.

Through some microscopic dissection, the Chipworks crew came to the conclusion the A7 is built using the same 28-nm HKMG process as Samsung's Exynos 5410 CPU, the processor found inside the octa-core version of the Galaxy S4.

Blood is thicker than water, we suppose.

Made a break with M7

Apple is stuck relying on Samsung for its mobile CPUs it would seem, though perhaps by the time the iPhone 6 lands the company will have made a clean break.

There is, however, one third-party chip claim Apple can stake with the 5S.

Chipworks identified the M7 co-processor, which collects and processes accelerometer, gyroscope and compass data, as an NXP Semiconductors product.