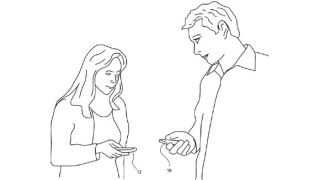 The next iPhone could contain near-field communication (NFC) technology, or something very similar to it, thanks to a patent issued to Apple this week.

The U.S. Patent and Trademark Office granted the company a patent over "techniques for triggering a process within a portable electronic device that identifies itself for purposes of establishing communications with another device that is in proximity."

In other words, you can throw away that age-old Bump application. This technology would allow iOS device users to wirelessly transfer things like contacts and media files with similar devices nearby.

Patent US 8,290,434 B2 also illustrates how the now-protected idea could help those same users conduct secure payments at NFC terminals.

Android phones have been able to wirelessly pay for groceries and use loyalty cards with just the presence of their smartphone and the Google Wallet application.

Samsung even used NFC in an ad as a way to show the Galaxy S3 was superior to Apple's iPhone 5.

Apple is finally catching up, on its own terms

Instead, he touted Passbook as an alternative, even though it can't process payments at NFC terminals. He could still be right that NFC isn't in Apple's future, as the company does look as if it's technically going with an NFC alternative.

Apple has a history of striking out on its own, from bypassing USB Micro for its own Lightning cable, to developing DisplayPort Mini instead of using HDMI or HDMI mini, to sticking with FireWire instead of being completely sold on USB.

Apple's patent for a NFC alternative is joined by a biometric iPhone patent that would allow iOS users securely unlock their devices with their fingerprint, eyes or face.

All of the patents will of course have to wait for new hardware, like the iPhone 6 and iPad 4, arrive from to Apple.