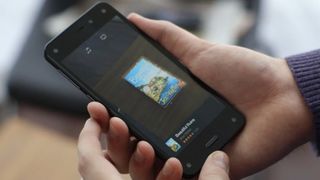 Amazon's first phone looks hot but does it impress?

After being long-rumored to introduce its own smartphone, Amazon has finally unveiled the Fire Phone, complete with a new 3D interface and a helpful information and shopping tool called Firefly.

The Amazon phone is counting on these novel features to grab customers, but are they enough to help the device stand out in today's crowded smartphone market?

Armed with its feisty name, the Fire phone is joining the already frantic fray between the LG G3, Samsung Galaxy S5 and iPhone 5S. While the Fire isn't equipped with the latest bleeding edge hardware, it offers some enticing features that may draw users away from the safety of Samsung and Apple.

Below, we pit key features of the latest smartphone entrant against the more established old guard.

Amazon hasn't skimped on the industrial build quality of its first handset. Featuring a rubberized frame, Gorilla Glass on both the front and back, CNC aluminum buttons, polished button chamfers, and injection-molded steel connectors every part of this handset should have a tight and precise fit.

The Fire is also smaller than most of its competitors thanks to having a more conservative 4.7-inch screen. Overall the Amazon smartphone measures 139.2 x 66.5 x 8.9mm in size and weighs 160 grams.

Despite having the second smallest screen of the bunch the Fire is still heavier than even the LG G3 and its 5.5-inch screen. This is likely because the Fire comes with two panes of Gorilla glass, whereas the LG G3 has a lightweight 149g plastic frame measuring 146.3 x 74.6 x 8.9mm.

The Samsung Galaxy S5 is made of a similarly lightweight 142 x 72.5 x 8.1mm plastic frame weighing only 145g. The Galaxy S5 also has the honor of being the only waterproof handset with a removable back, allowing users to replace the battery.

Screen resolution is of course only half the story. The Fire still has a leg up thanks to its display being an IPS panel, which should resolve better-than-average colors. Additionally IPS screens tend to have more generous viewing angles that should help keep the picture clear when users are twisting and tiling the Fire at odd angles when using its 3D interface.

Sadly the Fire also comes packing an older generation 2.2GHz quad-core Snapdragon 800 CPU paired with an Adreno 330 GPU, whereas most of its Android competition - including the Samsung Galaxy S5 and LG G3 - are powered with a 2.5GHz Qualcomm quad-core chip and Adreno 300 GPU.

All three handsets, however, come packing the same 2GB amount of RAM. That is, unless users are looking to pick up the 32GB version of the LG G3 with 3GB of RAM onboard.

Storage-wise customers can pick up a 32GB version of the Samsung Galaxy S5 to match the lowest level of Fire. Amazon's handset lacks any mircoSD slot for holding any additional data, though it will be available in a 64GB variant.

The iPhone 5S, meanwhile, is in its own older class of hardware using the Apple developed 1.3GHz dual-core A7 chip with 1GB RAM and a PowerVR G6430 GPU.