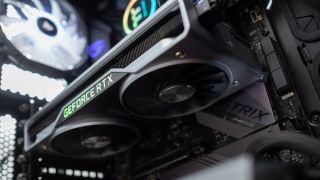 Rumor has it that Nvidia is going to reveal three new spins on its GeForce RTX graphics cards which could be juiced up in terms of clock speeds and have faster GDDR6 memory (as previously speculated).

This is the rumored ‘Super’ announcement Nvidia teased in May, pointing to some kind of big product launch, which as we recently reported seems likely to be refreshed versions of its RTX graphics cards to theoretically combat AMD’s imminent new Navi GPUs.

As mentioned, they will have faster video memory, with a previous rumor indicating there will be an increase from the current 14Gbps to 16Gbps in terms of memory speed. That extra bandwidth will mean an all-round faster graphics card.

Also, these refreshed variants of the GPUs could see faster clock speeds, but we have to underline that pinning down any exact details really is all very up-in-the-air speculation right now. We can’t even be certain Nvidia will refresh the GeForce RTX cards, but it does seem a likely move to run interference with AMD’s incoming new video boards.

Wccftech spotted this one, and has heard previous chatter on the graphics grapevine, with a rumor that emerged from the recent Computex show which claimed Nvidia is going to introduce two refreshed RTX graphics cards positioned above the 2070 and 2080 respectively.

These could theoretically be called the ‘GeForce RTX 2070 Super’ and ‘RTX 2080 Super’, going by Nvidia’s earlier teaser, and bump up clocks and memory speeds as already mentioned.

Potentially, launching such new models could allow Nvidia to cut the price on the existing RTX 2070 and 2080, making these more competitive compared to AMD’s Navi cards.

That said, we’d previously speculated that if new ‘Super’ versions are launched, these would simply replace the existing RTX cards, rather than run alongside them – but again, all this is guesswork.

Whatever Nvidia does – if anything – surely the whole point, given the timing, has to be to mess with AMD’s Navi launch, so we’re just keeping our fingers crossed that an attack on the value proposition front is coming, given that this would be the best news for consumers (because of how expensive the RTX GPUs are, particularly the 2070 and 2080).

It kind of makes sense that particularly at the higher-end, Nvidia could get away with driving profits with demanding pricing while AMD didn’t offer much of an alternative pre-Navi, but now that Navi is arriving, Nvidia will readjust its pricing downwards. And if it can do that while souping up the RTX cards with extra pep on the performance front to deliver a double blow, that could really take the wind out of Navi’s sails.

As ever, we’ll just have to wait and see, but it’s looking like E3 could be an interesting time for those in the market for a new graphics card.