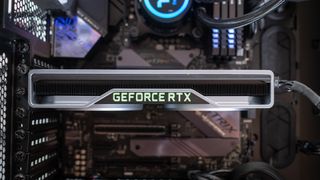 Nvidia has officially dropped the price of the GeForce RTX 2060 to $299 (and £275 in the UK), after graphics card maker EVGA had revealed a 2060 card at this price point back at CES.

So that’s the new asking price for the Founders Edition of the RTX 2060 when ordered direct from Nvidia, whereas previously it would have set you back $349.

In fact, EVGA’s RTX 2060 KO Gaming graphics card actually launched at $279 on January 13 in the US, but has now sold out. That’s not surprising at that price point, because it meant that this RTX 2060 was actually pitched at exactly the same recommended price AMD has set for its new Radeon RX 5600 XT (which will be available January 21).

Competing with the RTX 2060 is, of course, a different matter, plus as a member of the RTX family, that Nvidia graphics card also comes packing ray tracing cores.

When EVGA dropped the price of its KO (Knockout) Gaming card, we were mulling over whether this was the manufacturer acting alone, or whether this was part of some bigger plan orchestrated by Nvidia – and now we know it’s obviously the latter.

Presumably, then, other GPU makers will be dropping their RTX 2060 offerings, with the baseline models coming down to reflect this new price level – or possibly even lower in the spirit of competition, as EVGA did with its initial discount with the KO card (a discount which has now been withdrawn, by the way, although it’s a moot point as there is no stock of the KO Gaming left anyway right now).

Now we’ll have to see how AMD might respond to the move, and indeed how Nvidia’s line-up will be adjusted in light of the fact that the RTX 2060 is now sitting a lot closer to the top-end GTX Turing offerings.

Remember that the 1660 Ti is selling for much the same price as AMD’s incoming 5600 XT, or at least the cheapest versions are in the US currently, giving that GPU a similar problem in terms of its comparative value proposition to the RTX 2060.