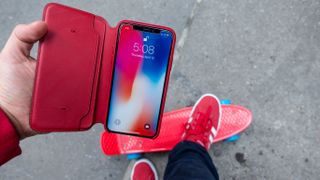 The iPhone 11 may introduce a significantly better front-facing camera, as a new leak indicates that Apple is upping its TrueDepth camera to 10MP.

This is sizable jump from the 7MP camera in the iPhone XS and iPhone XR to a 10MP camera, as reported by CompareRaja. It could improve selfie photos, Face ID, and Animoji in the next-generation iPhone.

There's also news about the previously leaked iPhone 11 triple-lens camera, with the new report suggesting there will be 14MP and 10MP sensors in two of the three cameras.

The third camera sensor resolution remains to be unknown. Given that Apple has traditionally made its telephoto lens the same MP size as the standard lens, the last camera could also feature a 14MP sensor as well.

To USB-C or not to USB-C? That is the question

Apple will reportedly stick with a Lightning port on the iPhone 11, even though the iPad Pro 11 and iPhone Pro 12.9 switched to USB-C.

USB-C has been predicted for the iPhone 11, but CompareRaja said it had "different information" via notable smartphone leaker Steve Hemmerstoffer. This particular iPhone prototype is said to show a traditional Lightning connection.

Of course, between now and the expected iPhone 11 launch in eight months Apple could start using USB-C. Also, since the company is expected to have three new iPhones for 2019, we could see more more advanced models, like the iPhone 11 Max, get USB-C.