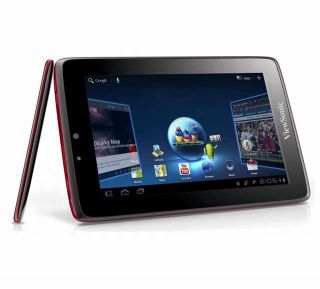 We had a chance today to get our hands on the latest ViewSonic tablet, the ViewPad 7x, and boy has it got some fancy 3D wizardry going on.

With a dual-core Nvidia Tegra 2 processor taking care of the hardware platform it's got a fair amount of horsepower under the hood, and with the ViewScene 3D layer over the top of the Android 3.0 OS it needs to be.

As one of the first 7-inch tablets sporting the Honeycomb OS it was always going to be right up here with the big boys of the tablet world, and ViewSonic is desperately hoping that the 3D-centric ViewScene 3D will give it the edge.

ViewSonic's own software layer over the top of the vanilla Android 3.0 interface is pretty advanced, and despite the amount of processing work its having to do it still remains very smooth.

You can add up to 16 pages to the spinning 3D desktop without getting any slow-down from the interface. And as we've learnt from Intel this week, responsiveness is king.

While you're engaged in the 3D mode too the individual screens are still live, with animations, such as clock widgets, still continuing in the background.

Over-use of the 3D effects though will cause slight issues in battery life, but according to ViewSonic it shouldn't be too bad as it doesn't tax the Tegra 2 processor a huge amount extra over plain 2D mode.

Still, the snazzy 3D shizzle is only really used when you're moving between homescreens, once you settle on one it switches to a more traditional 2D mode. Despite the complex-looking overlay though it should be simple for Android users to get to grips with.

General battery life though should be 6-7 hours of constant use, with significantly longer standby life.

It does offer a very smooth experience though the 1024x600 capacitive screen did need a firm touch to engage the 3D manipulation. Strangely the application screen seemed like it was visually tearing a little when it was scrolled.

We did also have a slight difficulty in scrolling around without my chubby fingers activating a single click rather than a smooth swipe. That though is a minor thing and something that wont take long to iron out.

But still it's a very powerful little device with the sort of polished GUI we really didn't expect from the likes of ViewSonic. Especially after the original ViewPad 7, not to mention the non-entity that was the ViewPad 10...

The physical design of the ViewPad 7x too is pleasing, feeling solid but light with a pleasingly smooth, rounded bezel. Compared with the horribly angular, and rather unappealing ViewPad 7 it's a very slinky little tablet.

It also comes with all the goodness you'd expect of a modern tablet, such as rear and front-facing cameras, capable of 720p video recording, mini HDMI out, stereo speakers and up to 32GB Micro SD support internally.

As for the base hardware specs you're looking at that dual-core Tegra 2, 1GB RAM and 8GB of internal storage.

We were impressed with our first taste of the ViewPad 7x, the 3D stuff is smooth, if a trifle flashy for some, but the tablet itself is beautifully designed and fits perfectly in the hand.

We can't wait to get our hands on the final release in July.