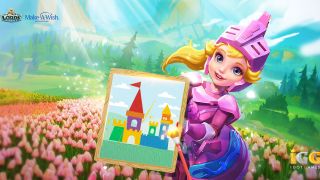 You were asked to design your own skin for an in-game castle. And as part of the competition, Lords Mobile publisher IGG promised to make a donation to the Make-a-Wish Foundation. It makes the wishes of critically ill children come true.

The competition has now closed, and the winner announced. But that means you will soon be able to try out the winning entry in Lords Mobile for yourself. All profits made from purchases of the castle skin in the first two weeks will also go to the Make-a-Wish Foundation. You're doing good deed while giving your Lords Mobile empire a fresh new look.

But which design won?

The competition's theme was 'Childhood Playground', asking for the kind of design that might bring up memories of care-free days playing with friends.

Our winner is Lords Mobile fan <LadyDorothy>, who did a fantastic job with artwork that packs in motifs of a fantasy castle, the beach, royal guards, a Ferris wheel and more. It's a stunner.

Here's the story behind the design, in <LadyDorothy>'s own words.

"My brother and I came up with the design. I'm not good at drawing, but he taught me how to draw. He also plays Lords Mobile. When we heard about this contest, we decided to participate. It took a while to come up with a concept, but we managed to come up with a few based on the theme. We thought of our childhood, and all the good memories we had while playing at the playground, so decided to design a playground that every child dreams of.

"We drew in a Ferris wheel and slides, both of which are popular with children. We also painted it in bright colors reminiscent of sweets. We also put in toy soldiers to guard the entrance, all of which were inspired by our own childhood memories."

By the time you read this, you may already be able to download this special charity competition castle skin in-game. It will be made by the Lords Mobile art team, and based on <LadyDorothy>'s castle design. You can also check out the fans' reaction to the original artwork on Facebook and Instagram.

Haven't played Lords Mobile yet? It's an award-winning strategy game with over 310 million players worldwide.

You develop your kingdom, managing resources and creating buildings to progress. Do battle to expand your empire and, when you get the hang of it, take on other real-world players in a strategic skirmish.

There are RPG elements too. Recruit and level-up powerful heroes to get an edge in combat, and join a guild of friendly players to become part of the Lords Mobile community.

Lords Mobile is a compelling game with many long-term fans, which makes the opportunity to re-skin your castles all the more attractive.

Why not give Lords Mobile a go today? You can download and play it for free on Android, iOS, Fire OS and Windows.