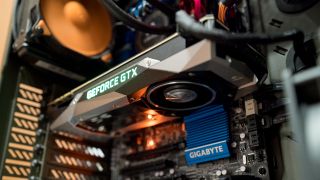 Nvidia could be planning to make its big reveal of the GeForce GTX 1080 Ti graphics card in less than two weeks’ time, perhaps in an effort to spoil AMD’s Vega party – even if the card doesn’t actually fully launch until next month (as per other rumors).

Invitations have just gone out for an Nvidia press event in San Francisco on February 28, which the graphics card maker reckons will be a showcase of ‘awesome’ PC gaming hardware.

As Game Debate, which received the invite, points out, that just happens to be the same day on which AMD has organized its ‘Capsaicin and Cream’ livestream, which is reportedly going to be the initial reveal of Vega cards (the company’s next-gen graphics offerings).

Both events are tied up with GDC (the Game Developers Conference in San Francisco), and it wouldn’t be the first time in the tech world that one company has scheduled an event in an attempt to steal thunder from a rival (we're looking at you, Microsoft and Apple).

Of course, Nvidia will need something juicy to show off, leading to the speculation that this will be the GTX 1080 Ti – the next big thing in the GeForce pipeline.

March of the graphics cards

Other rumors have pointed to a March launch for the 1080 Ti, and indeed a new one has popped up today from Nordic Hardware. The site claims to have got a tip from Taiwanese graphics card manufacturers that the supercharged GTX 1080 is currently in production and will be out next month, most likely in the penultimate week of March.

So we’re looking at a reveal at the end of this month, followed by availability later in March – if the various voices making themselves heard on the graphics grapevine are correct. Of course, all of this remains guesswork, albeit educated guesswork, at this point.

Nordic Hardware didn’t have any further information to reveal in terms of the spec of the 1080 Ti. Previous chatter has pointed to the card having a base clock of 1503MHz (with boost to 1623MHz) and 3,328 CUDA cores (only 256 less than the mighty Titan X). It will allegedly have less video memory than the Titan X, though, at 10GB (as opposed to 12GB).

Obviously enough, Nvidia has to make sure the 1080 Ti isn’t so close to the performance levels of the Titan X that it upsets buyers of the latter (because the new card will be considerably cheaper – relatively speaking, as it’ll hardly be cheap).