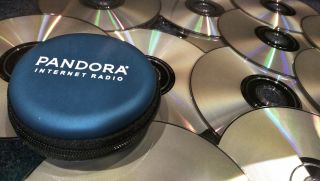 Part of the reason for that is its business model. In a world where Spotify goes toe to toe with Google Play Music, Rdio, Beats Music and Deezer for on-demand listening, Pandora styles itself as a personalised radio service.

So instead of selecting which tracks you want to hear, you create a radio station based on a track, artist or album, and Pandora's curation engine decides what music to actually play.

But despite the fact it has over 200 million users globally, the service is still only available in just three countries: the United States, Australia and New Zealand.

True world domination has been an ongoing battle thanks to the inconsistency in global compulsory licensing deals, according to Pandora co-founder Tim Westergren.

"The reason that we're in these three countries is because they have an affordable and compulsory license," he explains.

So with global launches proving to be a massive challenge, Westergren tells us that the company is working on turning the platform into a more social experience, connecting artists directly to their fans.

"I think we're entering a new era at Pandora where we're really going to start getting very active directly helping artists turn these big audiences into activated fans," he says.

The new platform, which is currently in beta and is expected to officially launch sometime this year, will allow artists to log in and claim their identities. From there, Westergren says they will be able to track what people are playing, when a song gets "thumbed up", view listens on a heat map and more.

This analytical data will offer musicians the ability to engage directly with fans, as well as help plan live tours and communicate messaging to that audience via audio messages, text messages and notifications.

"This will be primarily driven by the artists, so the set of tools will belong to the artist and they use [those tools] to get to fans. So the way it will appear to a fan is you'll be listening to a station and you thumb up a song, and the song ends and then there's an audio bumper by the artist of that song saying 'thanks for thumbing up my music, glad you liked it, I'm playing a show in Sydney next week, click on the link to buy a ticket'," Westergren explains.

Westergren also sees this new social approach to internet radio as the beginnings of an open platform, naturally lending itself to developer APIs for third party services to access.

"I think eventually, absolutely it will be part of a broader system. It's the kind of thing that lends itself to [things like] ticketing programs and loyalty programs," he says.

But while the service is still in beta, the economics of the new platform approach are still being refined. One thing Westergren seems confident of is that it won't be charging artists for the privilege.

"We want artists to use it, and we know that the vast majority of artists don't have money. Building a business by getting artists to pay for things is not usually a wise move," he admits.

Given the numbers involved with Pandora, it's hard to see artists refusing to play ball. Westergren claims that its research shows that for the top 1000 artists or so on Pandora, the number of people who have created an artist-based station is significantly larger than that artist's Twitter followers.

Westergren singles out Drake, who has 25 million Twitter followers, but 45 million Pandora stations based on his music, which opens up potentially massive market with the new Pandora platform.

Bringing musicians and fans together

But despite the push to be a social platform, Westergren is adamant that Pandora is not trying to become the next Facebook or Twitter (or even Twitter Music, for that matter).

It's more about becoming a platform to help musicians connect to their audience.

"Music is this funny category where on the one hand it's very social and people share things and go to concerts together, but they're also very self conscious about their taste," Westergren says.

So the platform isn't going to openly broadcast a user's habits to invite a more active engagement in the short term, although Westergren does admit there is clearly an opportunity for someone to become an influential curator on Pandora by helping followers build playlists.

With the challenges around global licensing and increased competition through services like Spotify and iTunes Radio, offering that monetisable connection to fans could be Pandora's next big step.

Of course, whether the artists are on board with it is another question entirely...