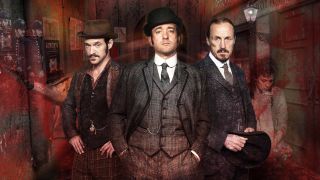 It might not be making it but without Netflix there would be no reboot of 24. And I'm convinced that without Amazon Prime there is no way that Heroes would have been brought back from the dead.

Neither of these shows will be available through on demand, but it is the push by streaming services to bring back cult-worthy programming that has almost certainly spurred traditional broadcasters to do the same thing.

Usually when a show dies it dies. There is no reappraisal, no second chance - broadcasters have taken into account the ratings, the advertising spend, the price of the stars and come to the very cold conclusion that a programme simply isn't viable anymore.

This happened in the UK recently with Ripper Street. The show performed well for the BBC in its first series, averaging 7.1 million viewers (a 22.9% share), but the audience halved in the second series with some episodes reaching around 3.2 million viewers.

Despite this, Ripper Street was voted the best show on TV by readers of the Radio Times in 2013. The show in its short time has garnered the type of cult status that makes it Prime property, with Amazon announcing a third series will be made available through Prime Instant Video.

Ripper Street may be a BBC production but it has global appeal. It was shown on BBC America and the Ten network in Australia, so the idea is that its re-emergence will bag Amazon new users for its on-demand service.

This news came just a week after Amazon rebranded Lovefilm in the UK and wrapped it into its Prime service. While this move brought some criticism given that Prime is now £30 a year more expensive in the UK, it was inevitable it was going to happen.

The service is now perfectly aligned with its US counterpart - an alignment that needed to happen if Amazon wanted to have a chance against its main streaming rival Netflix.

Netflix is the pioneer of show resuscitation. Its resurrection of Arrested Development and The Killing made as many headlines when they were announced as its original programming did. As with Amazon, this two-pronged approach to TV programming is essential for these streaming service to not just standout from the television crowd but also stand up against the likes of HBO and AMC.

Cultivating the cult is not always a surefire way of getting viewers, however. We all know what happened when Snakes On A Plane used internet chatter about the film to add new lines for Samuel Jackson. It was great publicity but simply wasn't reflected at the box office.

You have to make sure that the crowd you are pandering to has the money and the means to pay to watch your stuff.

Reviving shows, though, is a surefire way to get people talking about your service. Ripper Street may not yet have the cultural kudos of Arrested Development but it is a savvy move by Amazon - and I won't be surprised if it is the first of many.

Amazon Studios - where Ripper Street now resides - is actively doing more than Netflix in garnering its users' opinion on what should and shouldn't be streamed. It's serving up show pilots at an impressive rate and asking for feedback.

Netflix has struck it lucky so far with House Of Cards but its original content costs a hell of a lot to make. House Of Cards is priced at around $4 million an episode - and it pays a similar amount for Hemlock Grove and Orange Is The New Black.

Amazon is spending about a quarter of this on its original shows but both studios are making huge gambles with their new properties.

This is why reviving older shows makes a great deal of sense - they've already got a loyal fan base and this should result in higher viewing figures.

While I hope original programming goes from strength to strength - it is certainly keeping HBO on its toes - it makes sense that Amazon and Netflix spread bet when it comes to the shows they add.

Technology has helped massively in this, though. Where TV studios pour money into advertising, Netflix and Amazon can rely to some extent on their on-demand algorithms - they can choose the programmes you should be watching, giving them a higher chance of success.

It's great to see on-demand services acting as the last chance saloon for old shows - anything that shakes the cobwebs off the TV industry is fine by me.