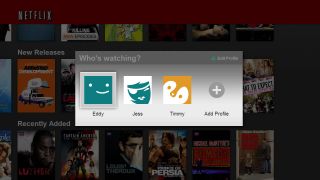 No personal touch for Android users

Netflix has announced that it has added profile functionality to its service as of today, so up to five people can have separate accounts on one subscription.

Although this new addition will be coming to many devices – PS3, Xbox 360 smart TVs, iOS, Apple TV – Wii users will have to wait a few months, while Android users are unfortunately left wanting with no news on when profiles will arrive for the mobile OS.

TechRadar spoke to Eddy Wu, director of product innovation, about the lack of Android support and he explained to us that it was purely because of resources in-house at Netflix.

"There will be a delay on Android and part of this is resources within the profile team," he explained.

He also hinted that there could be an overhaul of the Android service coming next year, noting: "There is stuff going on with Android, in that world, that we can't really talk about just yet."

There have been rumours that an Android and iOS remote app for Netflix was in the works but this is something that is yet to be confirmed.