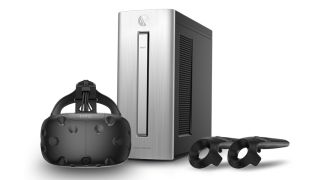 Update: Since publication, HTC has clarified that its executive was speaking of Vive's potential within the arcade space. We'll keep you posted should any arcade advancements trickle down into next-gen headsets. The original story follows.

Can't get enough of that room-scale VR feeling? A top HTC spokesperson has confirmed that a next-gen HTC Vive, an HTC Vive 2 headset is in the works.

Rikard Steiber, SVP of Virtual Reality at HTC told TechCrunch that, though the first commercially available Vive only went on sale a few months ago, new Vive virtual reality headsets are in development with a focus on "design factor" and "performance".

Though Steiber fell short of calling the device the HTC Vive 2, the mention of form factor updates suggests there will be some significant changes to the hardware. However, the exec also said that the device was set "to evolve", which may mean sweeping changes to the system could be off the table.

Though Steiber sees "innovation cycles" (read: hardware updates) as "sort of annual" for virtual reality, HTC's current push with Vive is to see arcade spaces using the headset set up in China and Taiwan, taking advantage of the business edition of the Vive.

Steiber didn't share much on what the Vive 2 could offer over its predecessor, but the leaks are starting to trickle through nonetheless. Just yesterday, we heard word that the company is working on the new headset under the codename "Oasis", tapping into the VR-future gazing ideas found in Ernest Cline's best-selling novel Ready Player One.

HTC is also working with Bulgarian VR company Quark VR to build a wireless-capable version of the HTC Vive.