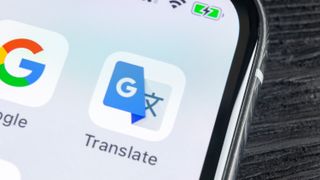 Google Translate will soon offer a new feature that translates spoken words to another language, transcribes them in real time, and saves the results as a handy text file that you can use later.

Real-time transcription is currently in the prototype stage, but Google says it's scheduled to start rolling out for Android phones later this year.

As The Verge reports, the feature is likely to need an internet connection when it launches, due to the increased processing power needed to offer multilingual translation together with real-time text rendering. The app also has to interpret the cadence of speech and any pauses, and add punctuation as appropriate.

That means you'll need to be careful using it when roaming to avoid racking up a hefty data bill. However, it's most likely to be useful for lectures and conferences, which take place in venues that are likely to have dependable Wi-Fi available.

To begin with, real-time transcription in Google Translate will only work with live spoken words captured through your phone's microphone, but the ability to transcribe pre-recorded audio files may be added in future.

Google also expects the transcribed speech to become more accurate as time goes on and the app's algorithms are improved. We look forward to seeing (and testing) it on our own handsets, and will keep you updated as soon as we have an estimated release date.