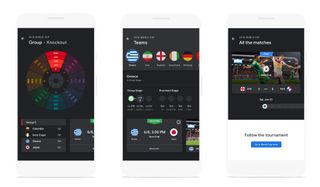 It’s not surprising given the prominence of the search engine giant, but Google really knows its audience.

With the 2018 FIFA World Cup only a few weeks away, Google have announced the rollout of a host of new football-focused features on its search function, to help fans keep up-to-date with the gargantuan sporting event.

Anyone using Google’s search engine to keep track of the tournament will find a dedicated drop-down portal for match schedules, group tables, trending players and any other news relevant to your experience of the Beautiful Game.

The window will let you ‘tap to watch live’ or get ongoing score updates over your mobile, with the option of pinning match scores to your Android phone screen that get updated in real-time. Within 30 minutes of the final whistle, you’ll also be able to see video recaps showing highlights and key goals from each game.

Everyone will be watching

The 2018 FIFA World Cup kicks off June 14th with a match between Russia and Saudi Arabia, as the first of 64 matches to be played over the following weeks. With the tournament taking place in Russia, it marks the first time the event has been hosted in Eastern Europe.

With a usual viewership numbered in the billions, television broadcasters and streaming services will be fighting to draw the biggest audience via their own channels, though Google as usual will be the go-to hub for news and updates throughout the competition.