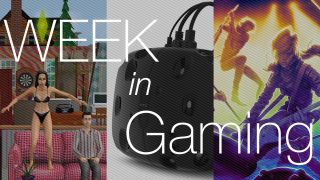 If you're not at GDC this week, the only place to be for anyone who loves games, technology and knowing about stuff before everyone else, then I'm very sorry. If it makes you feel better, I'm not at GDC either. I'm in a small, stuffy office in London and the nearest technology to me is my four-year old laptop. I'm not even slightly bitter. Old technology is the new new technology.

Luckily, we still get all the news from GDC (which stands for Game Developers' Conference) trickling down to us plebs from on high. The most exciting thing to come out of the conference so far is Valve and HTC partnering up to create a virtual reality headset, called Vive.

This is exciting because not only is it another opportunity to live the cool futuristic lives we all dreamed of as kids, but also because it adds another competitor to the Oculus Rift and Sony's Project Morpheus. And do you know what? Maybe this competitor will leave the others in the VR dust.

Firstly, anything with the Valve stamp of approval is always going to get the hype train going. A game studio that holds the power in their hands to make us all hyperventilate at any given point by announcing Half-Life 3, Portal 3, or pretty much any sequel to any game they've ever made, Valve is an incredibly powerful but quiet team.

Secondly, it's sharper than the Oculus Rift DK2, and possibly out on the market sooner, though it's much more unwieldy and ugly than the glossy, smooth Morpheus headset. Who will win the VR race? Only time and our inevitable motion sickness will tell.

But that's the future of games - what about the past? EA studio Maxis, which is being closed down, is responsible for some of our formative games, from The Sims and SimCity to the promising yet ultimately disappointing evolution simulator, Spore.

Co-founded by Will Wright in 1987, Maxis was a recognisable name to anyone who owned a PC in the early 2000s as their cheerfully colourful name popped up whenever we booted up The Sims. "Reticulating splines," they told us, and we smiled. What are splines? Who cares, we thought. Maxis are taking care of them. Who will reticulate our splines now, EA? Will you do it, or are you too busy dismantling our childhood?

Luckily Harmonix still care about you, because ROCK BAND 4. ROCK. BAND. FOUR. Yes! Finally, our dusty plastic instruments can come out of the cupboard of shame and back into our hearts, like the unloved Harry Potters of game peripherals.

Harmonix is like rhythm game royalty, with a cabinet of crown jewels including all things Guitar Hero and Rock Band, as well as cult favourite Amplitude, which was recently rebooted using Kickstarter for a release later this year.

So let's get down to the important stuff: what songs will we get to jam away on with our other plastic band friends? Polygon talked to Harmonix veteran Dave Plante, who's into his music like the rest of us are into breathing, and he had a few track suggestions.

Most of them were pretty retro - a bit of Jimi Hendrix here, a bit of Stevie Wonder there. Classic jams like Queen's Don't Stop Me Now and Tenacious D's Tribute (it's not the greatest song in the world, but it's at least in the top five) could be making their way into our living rooms.

So, that's all the news I have for you this week. If I were at GDC, I'd use this bit to say "goodbye, suckers" and then I'd go and eat a million burgers in the California sunshine. Unfortunately, I'm not, so I'll say goodbye in a normal way and eat a slightly soggy Pret sandwich in the chilly British cloud-glow that goes for sunshine around here. Bah.