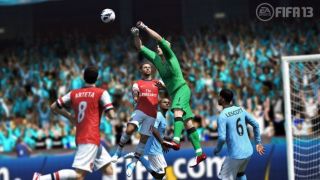 EA Sports' Mike McCabe has told TechRadar about the pressures behind the best-selling Fifa franchise, and the sheer amount of work involved in creating a game that remains popular for its entire life-cycle.

Fifa 13 launched last week to great reviews and with a host of new features designed to extend play time and make the game a 'stickier experience.

TechRadar caught up with McCabe head of emerging markets and new platforms for Fifa and one of the key figures in the franchise, to ask about the difficulties in launching an annual game, and making it resonate with its massive fan base.

"It's important for us to make that game relevant for a much longer period of time and that's changed in the way in which we create content on console games as well," said McCabe in a wide-ranging interview that we will be publishing in full in the coming days.

"We used to make the game, print the disc and then all go on holiday for three weeks because there was nothing else you can do but that's changed dramatically now.

"We still have that team who are making the game but based on the fact that the systems are live and we can now patch things and we could never do that before.

"We can patch things that are broken and, because the games are so complicated there is always going to be little things that we miss or little ways that people play that we can patch.

"Also, the live services team are a new phenomenon for us and within Fifa we have a Fifa live team who are spread around the world and are creating content continually.

"So you have the daily challenge for instance...and that's just the beginning. Within the console product we have Fifa Ultimate Team in which the individual player stats are based on real performance to the point that, within the product this year, we have live match mode where ultimately the actual real world performance is reflected within the game."

"Recently [Wayne] Rooney was taken out for a period - he's just back now and we had the move of [Robin] van Persie to deal with as well," he added.

"The demo was locked before the game was released but the communities were fairly vocal that he should be at Manchester United but we hadn't built that in so the users expect that now."

The need for live services clearly adds a new dimension to building the game and McCabe confesses that it brings new problems.

"It does [add pressure] but we have a responsibility and there is a responsibility to quality and as any group who are passionate about their product we want to make it the best that we possibly can."

EA has, yet again, come in for criticism from the likes of the BBC's Watchdog programme for the performance of its servers in the frantic few weeks after launch.

Although the programme aired after TechRadar's interview, McCabe had discussed how seriously the team took problems with the online services.

"We don't get it right every time but what we can do is monitor closely what is going on with things like the Twitter feeds," he told us.

"We know if something has gone wrong with the game very quickly. In fact if something goes wrong with, say, a server we hear it in the office because we can hear the feed beeps.

"Normally that's about once every half a second within the social teams and you can watch it with the screens running. If something goes wrong you hear it beeping even more constantly and you know that something is wrong.

"That kind of tool enables us to monitor sentiment within the audience and be able to react as quickly as possible.

"We want to try and fix things as quickly as possible - but servers go down and the fact that the games are much more sophisticated now than they have ever been previously means that we have redundancy, double redundancy and all sorts of things to make it as robust as possible."