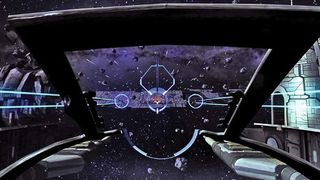 Even as other companies began to wind down at E3 2014, the Oculus booth was packed with people trying to get a glimpse of the future.

Oculus had four games on display for attendees to check out at its booth, but there were more scattered around the show - a sign that developers of all creeds have their faces buried in the Oculus Rift.

And that's not mentioning Sony's Project Morpheus, still in an early state but not to be discounted just yet.

As more and more games begin to use this tech, though, it's becoming ever more clear that developers are going to need to change the ways they design games if they want the tech to work. I played as many virtual reality games as I could during this year's E3, and these are the conclusions I drew.

Alien: Isolation was the biggest new game to be shown off on Oculus Rift this year, but it was also the most disappointing, in some ways.

The game, which has players skulking around a space station and hiding from a powerful Alien/Xenomoprh, is admittedly heart-poundingly scary. Looking down toward your chest to see the creature's sharp appendage sticking out is gut-wrenching.

But something feels off in Alien: Isolation, and it was difficult to pinpoint exactly what until I spoke with Paul Bettner, the founder and CEO of developer Playful and creator of another new Oculus game called Lucky's Tale, about how he made the cartoonish levels in his new platformer feel larger than life.

"There are some surprising techniques that we're using in there," Bettner said. When they first began building Lucky's Tale, his studio made the characters and environments the same size they'd be in a normal game - but when he tried it in Oculus he found everything looked off, the characters too big and the levels bland-looking.

"None of us had ever thought about well, how big is, you know, Crash Bandicoot or Mario or whatever, in real units?" Bettner said. "What we found in VR is apparently it's about 10 inches high. Kind of like a stuffed animal - that's what we expect to see when we think of a game character."

The problem may have been exacerbated by the fact that Lucky's Tale is a third-person game, the only one I've played on the Rift. But to fix the incongruity, they scaled the player's perspective up, moving players' "eyes" further apart, and made the character Lucky much smaller.

That also made the game world feel like a toy or a Disneyland ride, but compared with Lucky himself the level's trees, bridges and doors still look massive. It's actually a neat trick.

The same can't be said of Alien: Isolation. Given that it's not an Oculus exclusive like Lucky's Tale, the game world is proportioned like any other meant to be viewed through a TV or monitor screen. Thus when you're playing everything feels far too small.

Maybe this can be optimized as development continues, but other problems in Isolation - like the fact that movement direction is tied to where you're looking, instead of where you push the control stick - indicate that the developers at The Creative Assembly might be fundamentally misunderstanding the technology.

They're not the only ones

At least one other Oculus game featured at E3, Xing: The Land Beyond, suffered from problems similar to Alien: Isolation's. Featured at the Indiecade booth on the show floor, Xing is a beautiful first-person puzzle and exploration game not unlike the PC classic Myst, but playing it on the Rift took its toll.

I don't have a weak stomach, and I've never before experienced motion sickness when playing a virtual reality game - and I've played my fair share. But after spending just a few minutes walking around in Xing, I felt nausea so severe I actually thought I was going to vomit. I broke into a cold sweat and took the headset off eagerly when the demo was done, finally understanding why so many people have expressed concern over VR causing motion sickness.

John Torkington, one of the game's creators, said a lot of work went into optimizing Xing for Oculus. "The sense of scale is something you don't get on a standard monitor, but in 3D, especially in VR, you really do get a very grand sense of scale," Torkington said. "We did initially have some struggle making sure that was correct. Our initial tests we found that we were just a little munchkin with a huge world, and everything felt weird, even though on a monitor it looked right."

While Torkington and his cohorts at developer White Lotus Interactive may have fixed those scale issues before E3 - which is more than can be said for Alien: Isolation - Xing did have the same control issue as that game. Your entire virtual body shouldn't turn in a new direction just because you glance to the right or left - you should keep moving forward, independent of where you're looking. But some devs aren't getting it.

In any case, whatever optimization went into Xing apparently wasn't enough.