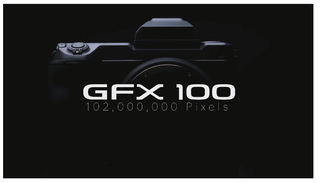 The first time we heard about a 100MP medium format camera from Fujifilm was back in September of last year, at Photokina 2018. Since then, the rumor mill has been rife with whispers of this high-resolution camera, but they can all now be put to rest.

In fact, given the sensor is 70% larger than a 35mm full-frame counterpart, Fujifilm prefers to call the GFX 100 a "large format" camera rather than a medium format one.

The sensor, however, isn't the only part of the GFX 100 that comes with a big number. The new pro shooter includes with some jaw-dropping specs that, combined, promise all-round top-notch performance.

It's all high-end from here

The high-speed autofocus performance – capable of locking in on a subject in 0.05 seconds – is matched by a whopping 3.78 million phase-detect AF pixels across the entire surface of the sensor and offering 100% coverage of the frame. This also makes the GFX 100 perform better in low-light conditions than both the GFX 50S and the GFX 50R.

Fujifilm has also improved its face- and pupil-detection technology and, the company claims, the GFX 100 will be able to track eyes even when the subject is turning away from the camera or is partially obscured by another object. While it does pick up multiple subjects, it is possible to choose one face in the crowd to focus on.

This is good news for both still and video shooters using the camera handheld, although the ability to shoot 4K video at up to 30fps will excite videographers. Recording to an SD card (there are two card slots here) is 10-bit 4:2:0, while using the HDMI port achieves a 10-bit 4:2:2 output.

Another highlight for the videographer is the addition of the ETERNA Film Simulation mode used for the first time in a GFX series camera.

It's all crystal clear

While the design of the camera is rather minimalistic, lacking the usual dials and buttons we're familiar with on other Fujifilm cameras, the GFX 100 boasts one of the best electronic viewfinders in the business. The newly developed 5.76 million-dot organic EL electronic viewfinder offers a magnification of 0.86x and a refresh rate of 86fps.

Also like the GFX 50S, this new high-res snapper boasts a 3.2-inch rear display that tilts in three directions, but there's also an additional 1.8-inch top plate LCD that's making its debut here. That top plate can be used as a "virtual dial mode" to display dials for adjusting settings like aperture, ISO and shutter speed, but it can also be set to show the histogram.

Another new feature is the new Smooth Skin Effect, which automatically retouches skin in-camera to smooth out the high level of details the 100MP sensor can capture.

The GFX 100 is significantly larger than its predecessors in the GFX 50 series, and weighs in at approximately 1,400g (or 3.1 pounds), including two batteries, a memory card and the EVF slid into place.