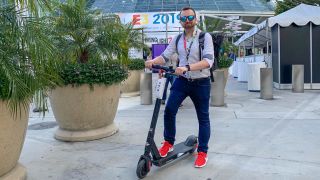 In life, there is no reset button. I had to keep reminding myself of that while riding an electric scooter through downtown Los Angeles on the way to E3 2019 all week.

It felt exactly like a video game: I was in a sprawling open-world city, weaving my way through notoriously congested LA traffic, and listening to bits and pieces of dialogue from eclectic non-playable characters that lined the sidewalks – their words took on a familiar doppler effect as I sped by.

I thought 'This is Grand Theft Auto: San Andreas Remastered for 2019'. I was able to easily commandeer my 'vehicle' from the popular electric scooter brands Bird and Lime, finding them on the sidewalk outside my hotel every morning. All it took to claim my ride was scanning a QR code via their respective apps (no actual GTA involved).

The good: a time, money and environment saver

Electric scooters represent a "last mile solution" to public transportation that can only get you so far, according to Boosted CEO Jeff Russakow. His company sells that idea via electric skateboards and now electric scooters to own.

Scooters, owned or rented, are thrilling, cost-efficient, and, importantly, time savers. Instead of my daily E3 commute taking 20 minutes to walk, I was consistently able to 'fast travel' to the Los Angeles Convention Center in just five minutes. This meant taking on more appointments and playing more [actual] video games.

Bonus round: both Bird and Lime sent push notifications when I docked a scooter, thanking me for helping save the environment. It's tough to measure how much carbon you're actually preventing from going into the atmosphere, though we suspect driving a car or taking an Uber is considerably worse for the planet.

The bad: a first-gen 'video game'

E3 2019 turned me into an electric scooter believer, though this is very much akin to a first-gen video game. It comes with hard-to-ignore bumps in the road.

Pay-as-you-go electric scooters are easy to rent via a dockless system that lets you pick them up on demand and leave them anywhere. But it has littered Los Angeles sidewalks (and, at times, LA streets when they topple over in a domino effect).

Drivers aren't sure how to respond to scooters, and there are many first-time riders lured in by the $1 to start and $0.15 per mile rate. No one I saw on a scooter during E3 2019 had a helmet on, though it's repeatedly recommended by the apps. Instead, people loved to ride with AirPods in both ears (which is illegal even on a bicycle).

Not all electric scooters zoom down the road equally. Rentable scooters get beat up over time and max out at 15mph (24kmph). They don't have the durability or oomph like the foldable Boosted Rev. Sometimes it felt like I was left with a dud.

Electric scooters have become controversial in LA for these reasons. There are solutions to this last mile solution's many problems: mapping out preferred parking zones where pedestrians won't trip over scooters, slow zones where scooters slow down to 2mph in heavy foot traffic, and no parking zones where you can't lock the scooter.

The Los Angeles Convention Center, home to E3, is one of those no parking zones. But I found a very video game-like glitch: lag. My phone's GPS lagged behind, so I was able to park my first scooter in a geofenced no parking zone unknowingly, and other people did too. Worse, when I tried to park the scooter across the street correctly, I was unable to lock it until the GPS cooperated and realized I was out of the no-go zone. So I just had to... hang out for several minutes. Great.

Nearly every time I parked a scooter near the Convention Center, people asked me how I was able to rent it. There was genuine interest in how everything worked.

"I downloaded the Bird app," I said in one instance to a curious pedestrian. "I've been able to ride all week. Haven't topped up yet." He then repeated it to his family. "Can you believe it? He only spent $20 and he's been riding all week!" Sounded like he was looking for permission to get his family (or maybe just himself) onto scooters.

I spent $19.89 to travel nearly a mile twice a day during E3 – from the hotel to the Convention Center and back. It changed the way I was able to book appointments, write about the games I saw, network with our team, and even sleep. I saved 30 minutes everyday, and during a convention week, that's crucial. I'd sign up for a dockless scooter service in New York City, if it were available, to halve my commute.

Like a good video game boss battle, the many challenges faced by electric scooters are no match for the true hero of this story: not scooters, but a last mile solution. The concept seems to be more than a fad, even if scooters come and go.