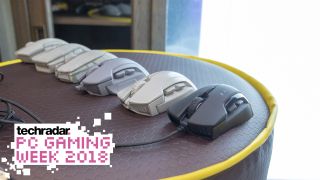 Gaming mice, though? Corsair isn’t exactly the first name that comes to mind, but there’s more going on behind the scenes than you think.

Gaming mice have actually been a recent focal point for Corsair, according to Corsair’s Product Manager of Keyboards and Mice, Michal Nowicki, and it all started with the Glaive RGB, which the company released in May 2017.

“[At the time,] we were missing something with an ultra-comfortable shape and that was highly customizable,” Nowicki recalls. “Because these are sort of elements of our DNA, we think that customizability, durability, and that comfort to play for hours and hours at a time is something that we're known for.

“In the past we had the M65 and the Saber, these were sort of our main vehicles at the time,” he says. “And then we make a decision; we need to start growing that portfolio. We need to start getting really serious about mice. So, the Glaive RGB was basically that”

Nowicki remembers the Glaive RGB being a real step-up challenge for him and his brand new Human Interface Device (HID) peripheral group to come up with a perfectly comfortable mouse shape.

“Design teams had to go through all these iterations of doing foam models, resin prints, 3D printing mock-ups and stuff like that,” Nowicki expounds while handing us a hefty 3D printed model made of plastic. “Every time you did this, you have to go and ask people “‘how do you like that shape?’”

At the very start of the design process, Nowicki’s team will come up with five or so models cut out of foam in a process similar to CNC machining. From there, the Corsair design group will narrow down their initial models to two or three concepts to be 3D printed.

“This is still not representative of the final product, because obviously it's a block of plastic and it's heavy,” Nowicki tells us. “So, you can't really tell what the weight is, but this is sort of an early example you can just show it around and tell people, ‘hey, the scroll wheel will be kind of like this.’”

From there the HID peripheral group can start putting together devices with more detail, playing around with different grips and even semi-functional items that allow them to start judging lighting performance.

“We have some ideas from our idea teams on textures, but sometimes it's like, okay, once we actually create a mock-up and look at the surface and go like, "Eh, you know what, yeah this probably needs something more,’” Nowicki’s expounds. “So, there's iterations of that as well.”

“The process itself is actually very involved, right, he says. “I mean you've got lots of cutwork and work with shapes.”

“We worked with quite a few esports teams, like Splyce, CLG, and others, and once we had an idea we basically would just show it to them. It's just like, ‘Okay, you know what these are five shapes. Pick one you like the most and what do you think we should change?’ And, then we just go forward and then further on we refine it until we have an actual working mock-up, which is then very close to the finished product.”

Taking it to the lab

As with its partnership with Cherry on keyboards, Corsair works closely with PixArt to supply the sensors for its mice. But Corsair isn’t simply just getting these mouse sensors in, slotting them into the bottom of their mice and calling it a day.

Rather, Nowicki tells us that Corsair adds features like DPI resolution adjustment to allow you to fine-tune your sensitivity. The gaming hardware maker also tunes its sensors to a variety of surfaces in addition to its own soft and hard mousepads.

“We also have a rig to test for malfunction speeds and how quickly your mouse will start tracking or how quickly you can move,” Nowicki details. “We have little rigs to test for silicone paths, how quickly they would deteriorate after using on different types of surfaces for example.”

More recently, Corsair also introduced their first wireless gaming mouse, in the form of the Dark Core RGB, that posed new challenges. Just like the K63 Wireless, Nowicki wanted a wireless peripheral that worked as well as wired, which meant a lot of controlled testing in an anechoic chamber before thoroughly evaluating their performance in a real life environment.

“At home, you have all this equipment there; routers and all these wireless devices, you have streaming stuff all over your apartment,” Nowicki explains. “There's so much noise, so much interference. That was a challenge, for us to make sure that the Dark Core RGB is doing well.

“We're constantly looking into improving our wireless tech, especially in the battery life department, he says. “We have quite a lot of knowledge right now from our first mouse and this is just the beginning of what's to come.”

Nowicki says we can expect a lot more from Corsair’s gaming mice in the near future – and we don’t just mean quantity, but also quality.

“I don't want to say that we didn't spend a whole lot of time designing mice in the past,” Nowicki says. “But you'll see that starting with Glaive; hey, we're really getting serious because we want to make sure that people really are talking about Corsair as far as gaming mice.”

“We're very happy with the Glaive RGB and Dark Core RGB right now,” he says. “There's a lot of things that we're working on right now, so you can expect a lot of new stuff coming out soon.”