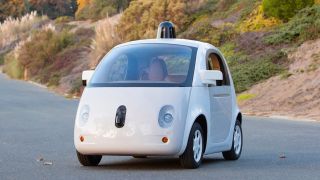 Like it or not, the self-driving cars are coming, and Google's very much leading the charge right now. The latest iteration of its driverless car ditched the steering wheel and brake entirely, causing the California department of motor vehicles to step in and ask for a wheel to be reinstated for Google's road testing.

So why did Google ditch the controls? Because you're not to be trusted.

Speaking at an SXSW talk, Astro Teller, the head of Google X, said that Google removed the steering wheel because human beings aren't a "reliable backup" to the self-driving tech.

Spin of the wheel

Teller said that Google has already nailed the art of driving. When it asked people to beta test the vehicles, however, they discovered users were too trusting of the car, partaking in questionable behaviour when they should have been paying attention for bugs in the system.

People do "really stupid stuff" when driving, said Teller. Google's concern is that, if people do silly things like texting when driving now, imagine what they might do if given control in an emergency situation.

So Google's response is to take complete control. While that might sound more terrifying to some of you, perhaps it's got a point...