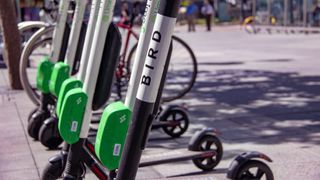 Bird, a giant in the burgeoning electric scooter market, has bought smaller company Scoot, enabling its two-wheelers to return to the streets of San Francisco.

The likes of Bird and Lime didn't endear themselves to the authorities when they flooded the city with so many scooters (without asking permission) that pedestrians were tripping over them.

After receiving hundreds of complaints about scooters cluttering sidewalks, being ridden carelessly and without helmets, and generally being a nuisance, the city had enough. In April 2018, it decreed that all companies must seek a license before littering the streets with scooters.

Twelve scooter suppliers submitted applications, but the authorities were tough and ultimately only handed permits to two smaller businesses: Skip and Scoot.

Scoot, which has happily existed as part of San Francisco's transport system for six years, will keep operating under its own name in the city, but with its new parent company at the helm.

The terms of Scoot and Skip's licenses set hard limits on the number of pay-to-ride scooters they can operate, but those might be relaxed in future if they continue to behave themselves.