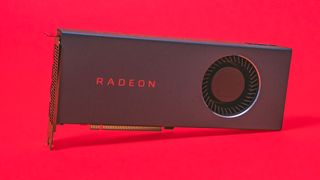 AMD’s chief executive has revealed that both high-end Navi GPUs and 7nm mobile processors for notebooks are inbound, and on schedule as planned.

Lisa Su was asked to clarify what’s going on with these products in a conference call related to AMD’s latest financial results (as spotted by Seeking Alpha), and she replied: “I would say they are coming. You should expect that our execution on those are on track and we have a rich 7-nanometer portfolio beyond the products that we have currently announced in the upcoming quarters.”

So, we can hopefully take that as a clear indication that high-end Navi graphics cards – products to rival Nvidia’s top GPUs – will be here before too long. Exactly how long is the key question for those who want a really powerful Navi offering from the AMD camp.

And that, in turn, suggests something that could compete with Nvidia’s top dog RTX 2080 Ti, depending on exactly how AMD implements it.

Alternatively, AMD may be targeting the RTX 2080 or its recently released Super variant, which may suit better in terms of achieving a more palatable level of competitive pricing.

Pricing is obviously a key issue for AMD in terms of trying to nab market share from Nvidia, as we’ve seen recently in the shenanigans with the price tag of the Radeon RX 5700 offerings.

Bear in mind that this is all fairly wild speculation from the GPU grapevine, and that the only new thing we’ve learned here is that some kind of high-end Navi product (or products) is in the pipeline, and things are going well enough in terms of realizing this, so it’s arriving on AMD’s planned timeline (whatever that might be).

While previous indications pointed to 2020 for a launch date, we may just see beefier Navi GPUs pitch up later this year.

AMD’s CEO also confirmed that 7nm mobile CPUs are on track, as well. This means chips built on 7nm Zen 2 with integrated 7nm graphics that should provide an impressive boost for gaming laptops. These CPUs, however, may not turn up until 2020, either – again all we know is that they are on schedule according to Su’s remark.