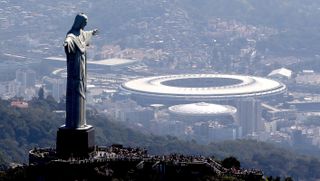 It's the final day of the Rio 2016 Olympics, and while the highlight of today will be the closing ceremony in the Olympic Stadium, before that there are 12 gold medals to be decided.

Team USA are hot favorites for the men's basketball final, despite complaints in the US media that this is the country's weakest Olympic team since Athens 2004, where the US only managed a bronze medal.

Another of the final day highlights is the men's marathon. Kenyan runners are likely to dominate, but the USA's Galen Rupp could claim a medal. Team GB will be represented by Scottish brothers Derek and Callum Hawkins, and Eritrean-born Tsegai Tewelde.

It promises to be a fantastic final day of Olympic action, and to make sure you don't miss any of the excitement from Rio, including the closing ceremony, we've compiled the ultimate guide to how to watch the Games on your TV, smartphone or tablet…

How keep up with the Rio Olympic Games schedule

The Rio 2016 Olympic Games run from August 3 to August 21, and 306 competitions in 42 different sports will be held across 33 different venues in Rio de Janeiro.

The prospect of keeping up with all the action at an Olympics can seem a bit overwhelming, but thankfully there are a number of ways to easily access the Rio 2016 schedule, so that you know when and where each sport is being played.

One of the easiest ways to keep up with the Olympics schedule is with Google, which has announced it will provide event schedules, medal counts and athlete information direct from its search results page.

All you need to do is type 'Rio Olympics' into Google, and you'll see a host of information about upcoming events.

The schedule will show you broadcast times in your local time zone, and Google will also be making event highlights from official broadcasters available on YouTube, so even if you can't watch the sports live you'll still get to see all the action.

If you have the Google app on Android or iOS, you can can stay abreast of developments with automatic updates. Just search for 'Rio Olympics', or the sport or athlete you're looking for, and you'll be asked if you want to turn on automatic updates.

In the UK the BBC will be showing a whopping 3,000 hours of live, free-to-air TV from the Rio 2016 Olympic Games, spread over its four TV channels and its BBC iPlayer app, which is available on every platform going.

Just as at London 2012, the BBC will deliver 24 live HD video streams, broadcasting eight of them live on its Red Button interactive service. The Olympics Playlist, a downloadable catch-up programme, will also be available to view every morning on iPlayer. Since the major events will be broadcast free-to-air, in the UK that brings into play live TV apps like TVCatchup.

In the US, head for the NBC Olympics Live Extra app, although live streaming online with NBC apps does require a login with a cable provider.

In Australia, Channel 7 will broadcast 1,000 hours free-to-air on its 7, 7two and 7mate TV channels, and provide online live broadcasts and catch-up. However, if you want access to Channel 7's 36 live streams from Rio, that means getting the PLUS7 app, which is reported to be charging for access during the games.

If you're going to be watching the Rio 2016 Olympic Games on your smartphone or tablet, then there are plenty of apps that are available for both iOS and Android devices, in addition to those mentioned above.

The official Rio 2016 app is available for Android, iOS and Windows Mobile devices, and gives you updates, replays, and spectator tips for people who are in Rio de Janeiro for the games.

If you're in the UK, the BBC Sport app for iOS and Android will include live HD coverage.

How to watch the Rio 2016 Olympic Games in virtual reality

While many of us would love to be in Rio de Janeiro to watch the sports live at the stadium, for many of us it's just not possible. However, there are a number of ways to watch the Rio 2016 Olympic Games in virtual reality and 360 degree video, giving you a more immersive experience.

The BBC is getting in on the act by launching the BBC Sport 360 service to coincide with the Rio Olympics. It goes live on Friday August 5, and will broadcast live 360 video footage every day, with a daily 360 video highlights roundup as well.

You can view the 360 degree Olympic footage using a dedicated BBC Sport 360 app, which is available for Android, iOS and Samsung Gear VR.

You can slot your handset into a compatible VR headset, such as Google Cardboard, and you can check out our how to turn your smartphone into a virtual reality headset guide to find out more.

You can also view the 360 degree footage on your PC or laptop through the BBC Taster website. The BBC is experimenting with this technology, so it may not be completely flawless, but it's an exciting time for Olympic fans.

Of course, many of us won't be able to make it to Rio de Janeiro to watch the 2016 Olympic Games live, but that doesn't mean we have to put up with a sub-par viewing experience.

If you're considering buying a new TV for the Rio 2016 Olympic Games the Hisense 65XT910 is a great choice – it's a 65-inch 4K TV that uses proprietary Hisense ULED 2.0 technology for vibrant high-contrast images, along with HDR, 3D and Smart TV technology.

While there won't be 4K broadcasts of the Rio 2016 Olympic Games, upscaled HD footage will look amazing – and getting a 4K TV now means you'll be future-proofed for the next Olympic Games and beyond.

Whatever TV you're watching on, be sure to check out our guide on How to set up your TV for the perfect picture, to find out how to get the best possible picture quality on your big screen.

The sound of the crowds cheering on the athletes as world records tumble is one of the most exciting parts of the Olympics – and if you're planning to get fully immersed in the Rio 2016 Games you won't want to rely on the tinny speakers of your TV.

If you want the absolute top sound quality – and you have a budget that can accommodate the asking price – then the Monitor Audio R90HT1 5.1 speaker package (£1,499, around $2,170, AU$2,915) is well worth the investment, with surround sound capabilities that will help you to feel like you're inside the stadium, watching the Games live.

If space – and budget – are more of a concern then a soundbar is a great choice, offering great sound quality and virtual surround sound without the nuisance of speaker wires trailing everywhere. The Denon HEOS HomeCinema soundbar and sub-woofer is well worth considering – and its HEOS multi-room technology enables you to connect multiple soundbars throughout your house to play music, making it a great choice for after-game parties.

For more soundbar suggestions check out our list of the 10 best soundbars for your TV.