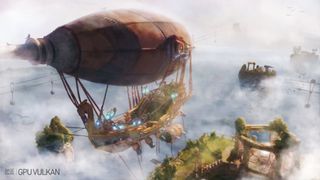 The battle for graphics card supremacy just got a little more interesting. Nvidia unveiled its GTX 1080 and 1070, with power rivaling that of its beastly GTX 980 Ti. AMD just revealed its Radeon RX 480, a powerful and relatively low-cost GPU that will help bring VR to the masses.

Advancements in graphical technology aren't the exclusive domain of hardware, however. While new card announcements get the lion's share of attention, it's software that ensures all that power doesn't go to waste. The fastest sports car in the world sits idle on the track until a skilled driver gets behind the wheel, after all. That's where Vulkan comes into play.

Vulkan, first announced by non-profit tech consortium Khronos Group at the Game Developers Conference in 2015, is a cross-platform application programming interface that enhances everything today's graphics cards can do.

As a low-overhead API, Vulkan is the next step forward for AMD's Mantle API, which in of itself was a spiritual successor of the OpenGL interface. Though it is built on Mantle and AMD helped contribute, the Khronos Group is largely responsible for Vulkan's development.

AMD introduced Mantle in 2013, and with it came significant changes to the OpenGL platform. Mantle helped unify the console and PC markets under a common graphics architecture. Co-created with EA's DICE, studio behind Battlefield, Mantle adapted the multi-core advantages of consoles and brought them to the more robust hardware of PC.

According to Robert Hallock, AMD's Head of Global Technical Marketing, AMD contributed the Mantle platform to Khronos "to jumpstart the process of bringing the OpenGL family over to a low overhead approach."

"In its day, Mantle was the fastest adopted PC graphics API since DirectX 9," Hallock said. Vulkan takes that base and builds on it, making a next-generation, open-source platform to take gaming further than it's ever been.

What does Vulkan do?

Simply put, Vulkan is the next step in the evolution of open standards popularized by OpenGL, and is the the direct decedent of AMD's Mantle API.

According to Senior Manager of Public Relations at AMD Antal Tungler, Vulkan brings "roughly the same benefits as DirectX 12" does over its predecessor.

Graphics look nicer, and games run faster, on both DirectX 12 and Vulkan, however, it also has advantages over Microsoft's platform beyond performance.

For starters, DirectX 12 is baked into Windows 10, Microsoft's all-in-one platform. That's great for developers looking to move their code from, say, Xbox One to Windows Phone. It's not so great if you're developing outside the Windows ecosystem. That's where Vulkan comes in.

Vulkan code is platform agnostic, from console, to PC, to smartphone, regardless of operating system.

"From a very high level," both DirectX 12 and Vulkan "serve the same goal," Hallock, said.

Both give more control than predecessors to developers. Both offer measurable improvements in efficiency. But the cross-platform aspect of Vulkan means games will run on Windows 7, 8, or 10, and Linux, with what Hallock calls "essentially the same codebase."

Current page: What is Vulkan?