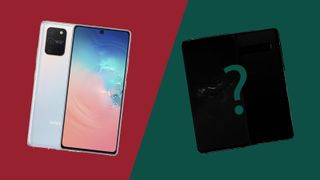 The Samsung Galaxy S11 is expected to be unveiled in February, but just when we thought we were enjoying the calm before the storm, Samsung unexpectedly announced two affordable versions of its 2019 flagships: the Galaxy S10 Lite and Galaxy Note 10 Lite.

These two phones boil down the essentials of the respective flagships into devices that are likely to be significantly cheaper (Samsung hasn't revealed their prices yet). Here we’ll be taking a closer look at the S10 Lite, particularly the changes it brings from the Galaxy S10, to see if there's anything it can tell us in terms of what to expect from the Galaxy S11.

The Lite version of the phone introduces some spec upgrades over the base device, and these could point to changes Samsung is making with its upcoming handsets. Bear in mind that what follows is speculation, and nothing is confirmed, but we think we can divine a fair bit about Samsung's next flagship phone.

Big screens are in

The Samsung Galaxy S10 Lite has a whopping 6.7-inch display, which is the same as the Galaxy S10 5G, but bigger than the 6.1 inches and 6.4 inches of the Galaxy S10 and S10 Plus respectively. It seems, then, that Samsung is looking to cater for those of us who like huge screens on our phones.

Now that its existing ‘Plus’ phones have been made to look small in comparison to the new ‘Lite’ device, Samsung may want to shift each of its devices up a step – so the S11 Plus could be around a palm-stretching 6.7 inches, with the S11 coming in at perhaps 6.4 inches.

The return of old screen tech

While the Samsung Galaxy S10 has a Dynamic AMOLED screen, the S10 Lite comes with a Super AMOLED Plus display. Yes, most of the names Samsung uses for its screens are just marketing buzzwords, but the latter is actually tech the company used in its now-ancient Galaxy S2, and which came with some perks that we might see return.

In the Samsung Galaxy S2, the Super AMOLED Plus panel was impressively bright while also energy efficient. Since a bright screen is usually the main thing that drains the battery, perhaps Samsung is bringing back this older tech in order to extend the battery life somewhat.

If the tech proves popular in the Galaxy S10 Lite, it’s possible that Samsung will bring it to the S11 too, albeit with improvements to other aspects of the display, as long-lasting battery life is one of the most important features to many smartphone users.

While Samsung stuck to using an array of 12MP camera sensors on the Galaxy S10, despite higher-resolution options being available, the S10 Lite features the first 48MP snapper in the Galaxy S range. It seems, then, that Samsung is no longer sticking to its previous policy of using lower-res sensors, with powerful post-processing employed to optimize image quality, and instead will go with more megapixels.

That's in line with what we’ve heard on the S11 grapevine, with specs leaks pointing to a 108MP main camera as well as a 48MP sensor with a telephoto lens, and upgraded specs for the other two or three cameras.

Punch-holes are here to stay

When the Samsung Galaxy S10 came out with its ‘punch-hole’ selfie camera, Samsung made sure to point out that it was already trying to drop the new design feature. With punch-holes present on the Galaxy Note 10, however – and now the S10 Lite – it seems that this design feature is here to stay, for while at least.

We don’t know if the cut-out will be in a corner, as is the case with the main Galaxy S10 range, or central as on the Note 10s and the S10 Lite, but we’d be very surprised if Samsung introduced a pop-up section or some other solution for its front-facing cameras.

Many current smartphones have a similar three-camera combo of main, telephoto and ultra-wide snappers, with most tending to forego a macro lens – the Xiaomi Mi Note 10 and Honor 20 Pro are two exceptions. Macro lenses are used for taking pictures of close-up objects in great detail, and many people find them more useful than telephoto lenses.

The Samsung Galaxy S10 Lite is the first Galaxy S device to have a macro lens, so it seems that Samsung has finally decided that it's worth including this photography feature on its phones.

And now that Samsung has embraced macro shooting on the S10 Lite, it’s very likely that the company will also include a macro lens on the S11, especially if that device has up to five rear cameras, as has been rumored.

The Samsung Galaxy S10 Lite seems to have the same chipset in all regions, which isn’t always the case for Galaxy S devices – typically, the phones have a Qualcomm Snapdragon chipset in some regions and Samsung's own Exynos processor in others.

In our testing we’ve often found that the former chipset delivers slightly faster performance, so users of phones that have the Exynos chip arguably get a (marginally) less capable phone.

However, if Samsung follows the precedent it's set with the Galaxy S10 Lite, all regions could get the Snapdragon processor in the Galaxy S11. That doesn’t mean Exynos chipsets would disappear completely, as there would still be scope for Samsung to use them in its various other phones ranges, including the A, Note, J and M devices.

The Samsung Galaxy S10 Lite competes quite a bit with the Galaxy S10e, which Samsung launched in 2019 as the ‘affordable’ variant of the S10. So is it likely that Samsung will release two ‘lite’ versions of the same device again? Well, it depends somewhat on eventual sales figures, but possibly not.

While the announcement of the S10 Lite has come much closer to the arrival of the S11 than to the launch of the S10, we don't expect Samsung to repeat this schedule with its next flagship range. Instead, Samsung could drop the affordable device from its launch lineup for the S11 range, and then release a Lite/e version six months after the original device's launch, as it's done with the Note 10 and Note 10 Lite, and as Google did with its Pixel 3 and Pixel 3a.

This would be a way to get more people invested in the affordable version of the Galaxy S11, although since the company's budget ranges are already so strong, we could see it just drop the ‘Lite’ or ‘e’ device entirely, instead directing customers to buy one of its competent Galaxy A phones instead.