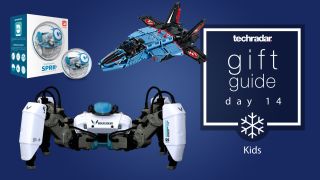 Christmas shopping for kids can be a real challenge – you don't want to present them with a thoughtful gift that will be enjoyed for a couple of days and then spend the rest of the year gathering dust. That's where tech toys come in – particularly ones that can grow with their owners and keep presenting them with more fun challenges as they learn.

There's no shortage of tech toys that promise to inspire a passion for STEM (science, technology, engineering and maths), but we've rounded up the ones that are more than just a novelty, and will keep kids entertained for months or even years (plus a couple that are just fun).

We've picked out a range of top tech toys for all ages so you'll be able to find something that'll appeal to the youngsters on your Christmas list (and perhaps some of the adults, too).

Sphero is perhaps best known for its R2-D2 and BB8 droids, but it's now moved away from licensed toys into its own original designs, like the SPRK+. This rolling robot resembles a hamster ball, and is fully watertight so it can be used on the floor or in the bath.

It's seriously versatile too, and can be programmed using the accompanying mobile app to achieve all kinds of tasks, including navigating a maze, 'dancing' with multicolored lights, and even mimicking the movements of planets in the solar system.

SPRK+ can grow with your kids too, with a variety of different coding methods for different ages and abilities. Start by drawing simple paths, move onto building code from blocks and eventually work up to writing code by hand. It's not cheap, but SPRK+ is a great tech toy that'll last years. Available through Amazon Launchpad.

An augmented reality battle bot with tons of personality

You can fight against virtual enemies, which appear on your phone's screen, but it's even more fun to do battle with another Mekamon. The bots are wonderfully characterful, performing victory dances, stamping their feet in anger, and even collapsing on their backs when defeated. It's possible to create your own custom animations in the app too, and share them with others.

The only downside is that, although you can remove and replace its armor plates and guns into different configurations, kids don't get the fun of building it themselves, as they do with some of the toys in this list. Available through Amazon Launchpad.

A feature-packed Lego Technic set with lots of motorized parts

Lego Technic is always a brilliant gift, and the Lego Air Race Jet is a fantastic way to get started. It won't actually take off, but it features lots of fun motorized parts: an adjustable jet nozzle, opening cockpit, hatch access to a spinning fan, retractable undercarriage and moving wing flaps.

With just over 1,000 pieces, it should keep kids of all ages occupied for many happy hours, and that's before they have fun combining it with their other Lego and Lego Technic sets. Lego says the Air Race Jet is suitable for kids aged 10-16, but older kids and adults will be equally pleased to find it under the tree.

The instructions also include details of how to build a smaller private jet using the same collection of parts, but it doesn't offer as many interesting motorized functions as the main model.

Need a gift for a creative kid who enjoys thinking outside the box? This is the droid you're looking for. The LittleBits Star Wars Droid Inventor Kit includes a basic chassis, plus a wealth of components (known as 'bits') that can be connected and rearranged in various ways to perform different functions. It might look intimidating at first, but the whole process is explained in clear step-by-step instructions and 3D diagrams in the accompanying app.

The app also provides various 'missions', which are tasks that can be completed by configuring the droid in a particular way. One task involves recording a message to be played back later, while another requires you to build a droid that can perform a handshake.

Kids can create their own programs using blocks of pre-written code, helping kids understand the principles of programming, and introducing concepts gradually with practical applications to make the knowledge stick. Available through Amazon Launchpad.

A great toy for introducing little ones to basic coding concepts

The Fisher-Price Think & Learn Code-a-Pillar is a great toy for getting kids used to basic coding concepts, which will give them a head-start when they start computing lessons at school.

Once they've got the hang of the idea, you can expand their options with add-on packs containing extra sections, including extra sounds and 180-degree turns. Just clear some floor space and let them experiment.