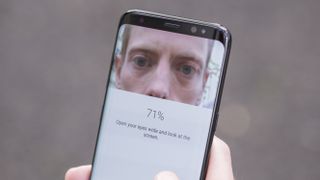 The Samsung Galaxy S8 iris scanner isn't completely foolproof, according to German hackers who say they found a way to bypass the phone's lockscreen.

That's a problem for Samsung, which actually claims on its website that the Galaxy S8 and Galaxy S8 Plus iris scanner is 'Security that's foolproof'. Oops.

However, this is more of an overpromise than an issue for most users. Many biometric unlock methods have been found to be vulnerable.

The iPhone fingerprint sensor was also hacked by the same group, Chaos Computer Club. Your smartphone information is only so safe in 2017.

How to hack the Galaxy S8 iris scanner

It still takes a little bit of work to bypass the Samsung Galaxy S8 iris scanner. You'll need some widely available accessories, according to the hacker group.

Here's what the Chaos Computer Club used to break in:

The picture can be taken at medium range and is best shot in night mode, as the Galaxy S8 iris scanner works with an infrared light.

These are all normal, off-the-shelf parts, and the hackers note that the total bill for these items costs less than the Samsung Galaxy S8 price.

But that's not what's ironic. The group pokes a bit of fun at Samsung, noting that they used a Samsung laser printer to pull off the break-in.

Again, this shouldn't alarm you too much. No phone unlock method is foolproof and it takes work to circumvent the Galaxy S8 with the above steps. You can remotely erase your phone by the time a stranger at the bar gets these parts together.

However, this could push Samsung to refine its iris scanner in time for the Samsung Galaxy Note 8 release date, expected in August or September.