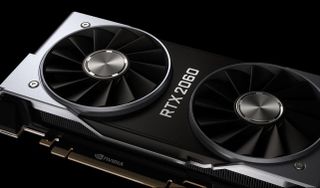 Nvidia’s GeForce RTX range of graphics cards could represent two-thirds of the company’s overall GPU sales – depending on how you read a couple of recent comments from Nvidia’s chief bean counter.

CFO Colette Kress offered up some interesting nuggets on the topic of Nvidia sales at the Credit Suisse Annual Technology Conference, including this: “Our ray tracing boards, that we sell in desktop, two-thirds of it is now with ray tracing. So we’re really pleased with the market adoption of it and of course there is absolutely more room to grow.”

So you would imagine that ‘ray tracing boards’ refers specifically to GeForce RTX products, which have the relevant specialized ray tracing cores on-board to accelerate performance.

But wait a minute – as PC GamesN, which highlighted this, observes, Kress goes on to make a further statement throwing some confusion on exactly what she might be referring to here.

This comment really muddies the waters. In her estimation of two-thirds of all Nvidia desktop GPU sales, is the CFO including GTX Turing models (which even if they don’t have RT cores, did get ray tracing support in Nvidia’s drivers back in April, so are officially ray tracing capable, at least in theory).

Because then, that’s a rather different ballgame than saying RTX graphics cards represent the majority of sales, of course.

Even then, you can’t get a GTX 16-series graphics card for a hundred bucks – even the base GTX 1650 isn’t that cheap. So maybe these are simply wonky price estimations from Kress; just rough figures that make things sound better.

Or, perhaps, Kress is broadly referring to the entire range of Nvidia’s cards, and that you can buy something for a hundred notes, or you can go more expensive than that in order to participate in ray tracing – potentially all the way up to a grand.

In short, it’s not clear, and we simply don’t know without further clarification (which it will be interesting to see if Kress or Nvidia provides).

What we do know, however, is that Nvidia is making an absolute mountain of cash from RTX graphics cards. At least according to a recent report from analyst firm John Peddie which showed that Nvidia’s RTX graphics cards represent two-thirds of its gaming revenue – but note that’s money made, not units sold.

Which prompts another thought: given that both figures cited are ‘two-thirds’, there’s no chance Kress could actually be referring to revenue (as per this analyst’s report), rather than units shipped?

Ultimately, these comments raise more questions than they provide answers, but it would seem to be common sense that the more affordable GTX models represent the majority of sales, and are what most mainstream buyers would plump for – surely?

So if RTX graphics cards do actually represent two-thirds of units sold for Nvidia, then that’s a startling figure to say the least, and it must mean that the RTX 2060 is doing some blistering trade…