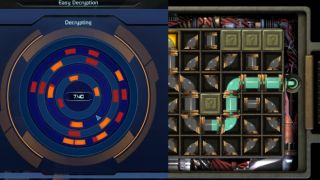 After a lot of delay and a huge amount of hype, Watch Dogs has finally arrived. But Ubisoft's hyper-connected sandbox certainly isn't the first game to tackle the hackers.

From Enter The Matrix to Bioshock, games have been trying to make hacking interesting for years. Some have hit, some have been compromised in the act.

It's certainly no easy task to take something so complex and boil it down to a form that makes you feel like a real Aiden Pearce while still being fun.

So here's our pick of the games that got it right - and those that were sorely off the mark.

You'd think that nailing a game based on the world of The Matrix would be a doozy. BZZZT wrong. Enter the Matrix was sorely disappointing on every level - except one. While the action failed to immerse us in the Wachowski brothers' alternate reality, the game's surprisingly rich hacking system let us feel like Morpheus for a fleeting few moments.

Based on the DOS operating system, hacking could be used to unlock cheats and weapons by navigating file structures. Unlocking the multiplayer mode was neat, but everyone knows that the real quest was getting that sword.

Will Watch Dogs de-crown Uplink as the hacking game? Introversion Software's title turns 13 this year so it's about time someone did.

Uplink took most of its inspiration from Hollywood, basing its cinematic style on films like Wargames. Perhaps the "hacking simulator" genre will never earn mainstream appeal, but for the cyber thrill seekers Uplink had enough depth to make it the go-to game. Get in, do your thing, and then get out before the FBI manage to trace you.

The game's fostered a thriving modding community over the years, and even got an iPad release in 2012.

So long as your science skill was high enough to access them, Fallout 3's hacking terminals provided a neat mini-game that actually demand a bit of strategy. Each terminal throws up a bunch of words mixed with random characters - one of which is obscuring the correct password - and from that point it's a process of elimination.

Really, a computer that tells you when you're getting closer to the answer doesn't make a lot of sense in the real world, but for the sake of the game it works well. Just watch out for those trap terminals. You know, the ones with the FRAG GRENADES INSIDE.

Bioshock approached hacking like it was plumbing, streaming data (illustrated as a liquid) from point A to point B through one big pipe. It was basically Pipe Mania but with added risk of death; failing a Bioshock hack could mean triggering an alarm.

Hacking could be used to access security bots, cameras turrets, and reduce the price of vending machines and health stations. Equipping engineering tonics would improve the player's hacking ability, but you could skip it all if you had an automatic hack tool to hand.

With its focus on themes like AI and espionage, the fact that Deux Ex: Human Revolution had a solid hacking element shouldn't have been too surprising. The player hacked into terminals via an I/O port and was then faced with a number of nodes which they had to capture. Hacking could gain access to safes, cameras, or be used to turn turret guns against the enemy.

There was also a good balance in difficulty as the task gets progressively harder at higher levels, which made it worth investing those points into the hacking skill. And the longer you took, the more likely it was that you'd be caught. It was enough to make you feel like a real-life Boris Grishenko.

Next Page ...and the worst
See more Gaming news