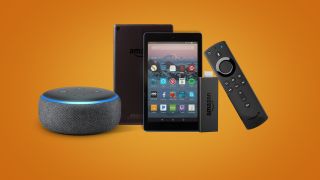 Christmas is coming around fast, so if you're still looking for presents, then the Amazon Last Minute Christmas Deals event can help, as it's got some excellent price cuts and last-minute deals for a huge range of gadgets and gifts.

Best of all, most of these are still able to be delivered before Christmas Day itself. We list the last dates you can order from Amazon for Christmas delivery below, but check before you order.

Meanwhile, Amazon has cut the price of loads of its own Alexa devices, such as the Amazon Echo, and there have also been a huge range of price cuts to TVs, laptops, audio equipment and a whole lot more.

So, if you're still doing your Christmas shopping, read on for our picks of the best Amazon Christmas Deals that are currently live.

These deals are live until December 22, though some of them are lightning deals, which means they are only live for a limited amount of time.

Last day to order on Amazon for Christmas

AncestryDNA DNA Activation Kit: £69 at Amazon
There's £10 off this DNA testing kit, making it cheaper than ever to trace your heritage and connect with relatives you didn't realise you had. The kit is great if you're curious about your own background, and makes a great Christmas present too.View Deal

Panasonic EH-NA65 pink hair dryer: £49.99 at Amazon
Need a powerful hairdryer? This Panasonic launched at £109.99 but now is over half that price, plus it comes with three different types of nozzle. According to Panasonic, this hair dryer can add volume and minimise frizz all while reducing damage to hair from brushing.View Deal

Amazon Echo Dot (3rd Gen): £24.99 at Amazon
The last-gen Echo Dot isn't the latest in the line of products from Amazon, but it's now much cheaper and at £25 it's an absolute steal as a way for you to get your smart home up and running. This product is in stock December 27, however.View Deal

Amazon Echo Show 5: £49.99 at Amazon
The Echo Show 5 is the best way to be able to interact with Amazon's Alexa voice assistant in a speaker that allows for a screen to show you certain elements. It means it can show you the weather, your calendar or even the news without you having to ask any questions, and now it's almost 40% off.View Deal

Amazon Echo Plus (2nd gen) + Philips Hue White Bulb: £109.99 at Amazon
The Echo Show 5 is the best way to be able to interact with Amazon's Alexa voice assistant in a speaker that allows for a screen to show you certain elements. It means it can show you the weather, your calendar or even the news without you having to ask any questions, and now it's almost 40% off.View Deal

Ring Video Doorbell Pro + Echo Show 5: £179 at Amazon
This bundle combines a great smart doorbell with a compact smart display that you can use to see who's ringing, as well as doing many other things, and currently it's nearly half price.View Deal

Amazon Echo Flex: £19.99 at Amazon
Want to get Amazon Alexa in all areas of your home? For those places where you don't have space for a smart speaker, you may find the Echo Flex does the job. It plugs into the wall, so you can even have Alexa answer your queries as you're walking down your corridor or in smaller rooms in your home.View Deal

Ring Video Doorbell Pro + Echo Show 5: £179 at Amazon
This bundle combines a great smart doorbell with a compact smart display that you can use to see who's ringing, as well as doing many other things, and currently it's less than half price.View Deal

Ring Door View Cam: £129 at Amazon
With its simple drill-free installation and battery-powered operation, the Ring Door View Cam is ideal for renters, while still offering most of the features of other smart doorbells, and right now you can get a 34% saving.View Deal

iPhone XS: at Amazon | 64GB £699
Don't need as big a screen as the XS Max above? Then Amazon also has a great deal on the smaller iPhone XS, with a 5.8-inch Retina OLED display, along with incredibly powerful smartphone tech as well, and another brilliant camera – all for £300 off!
View Deal

iPhone X: at Amazon | 64GB £599
Amazon has also knocked £300 off the older (yet still very good) iPhone X, which is now just £600. This is one of the best prices we've seen for Apple's smartphone, and if you order now, you'll get it before Christmas.
View Deal

iPad 10.2-inch: at Amazon | 32GB | Wi-Fi  | £289
Save £60 off Apple's latest version of its standard iPad. This is a great gift for people who fancy an Apple tablet without having to spend a fortune, and it's got some decent specs for the price.
View Deal

iPad Mini (2019) WiFi 256GB: £481.79 at Amazon
Save on the latest iPad Mini 256GB at Amazon this week. A step up from the previous 64GB model, you'll be able to store all the apps you might need on a day to day basis as well as loads of films, documents, and music on this light and portable Apple tablet.
View Deal

PlayStation 4 consoles: Up to 25% off at Amazon
If you're looking to get a PlayStation 4 for Christmas, either for yourself or for a loved one, then Amazon has up to 25% off a range of PS4 console bundles.View Deal

Samsung EVO Select 256GB microSDXC: £37.99 at Amazon
Save on this microSDXC card. We've not tested it with the Nintendo Switch, but Nintendo's own site and Amazon's reviews verify it's compatible. Fill your machine up with the best games around, or use it with your phone. The 128GB version is also available. View Deal

Acer Nitro 5, Intel Core i5, 8GB RAM, Nvidia GTX 1060: £857.99 at Amazon
If you're on the lookout for a budget gaming laptop, then this is one of the cheapest you'll find. A word of warning, though; it has a GTX 1060 GPU, which is beginning to show its age. So, this is not a very powerful gaming laptop, but if you're only playing casual games, it'll do.View Deal

Apple MacBook Air 13-inch Intel Core i5, 8GB RAM, 256GB:  £999.99 at Amazon
Amazon has cut a huge £400 of the price of the Apple MacBook Air. With an Intel Core i5 processor, 8GB RAM and 256GB storage, this is a brilliantly powerful – yet portable – MacBook, and for a fantastically low price.View Deal

LG 55-inch B9 OLED TV (2019): £1,099 at Amazon
For premium TV hunters, this £700 discount is the ultimate score. For just over £1,000 you get one of the best TVs of 2019 that uses LG's 2nd generation α7 Intelligent Processor to produce clearer and brighter images. If you want better-looking movies, this is the telly to invest in. Model number: OLED55B9PLA.View Deal

Sony Bravia 55-inch KD55XG81 4K TV: £679 at Amazon
This Sony Bravia 55-inch TV has had a £420 price cut in time for Christmas. The Sony XG81 Series handles 4K video with aplomb and even features Chromecast Built-In that allows you to cast to the TV from your phone. Model number: UKD55XG81.View Deal

Sennheiser Momentum Free Special Edition: £69.99 at Amazon
These great Bluetooth headphones have had a huge £110 knocked off their asking price in time for Christmas, and come in a black and red colour combo that's exclusive to Amazon. These headphones offer brilliant sound quality, especially when it comes to bass.View Deal

GoPro Hero 8 Black: £319 at Amazon
This is the lowest price we've seen for the Hero 8 Black, which is GoPro's new flagship action camera. It brings class-leading image stabilisation, a new built-in mount for easily attaching it to helmets or tripods, and compatibility with GoPro's forthcoming 'Mods' accessories in early 2020.View Deal