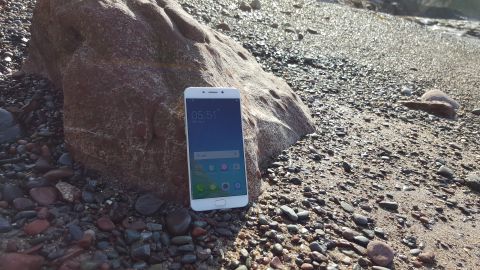 Let's be honest here. You're not going to buy the F1 Plus for the Oppo name. It's not on your radar because it has cutting edge specs. There is no irresistible standout feature here. What it does is offer a very competitive all-round package at a good price.

If the external look of your phone is very important to you, then the Oppo F1 Plus justifies the price. There isn't really another option in this category with such a premium metallic finish, and, if you like Apple's design, you'd be hard-pressed to find a phone that looks more like the iPhone 6S Plus.

What you'll be compromising on is the processor and the operating system, which I'll cover in more detail in the next section. But, just as there's no standout reason to buy, there's also no glaring omission here either. The Oppo F1 Plus doesn't have any major weaknesses.

The only feature that Oppo has gone out of its way to highlight is the selfie camera. The F1 Plus box bears the slogan "Selfie Expert", because Oppo is pushing the fact that it has a 16MP front-facing camera.

It takes perfectly nice photographs, but if it wasn't advertised, I wouldn't have noticed the selfie cam was highly rated. If you're a real selfie addict, then this might be noteworthy, but most of us would probably rather Oppo focused on making the main camera a bit better. Skip to the camera section for a closer look.

The biggest and most noticeable disappointment here is that the F1 Plus runs Color OS 3.0, which is based on Android 5.1 Lollipop.

If you're jumping back to this from the latest Android 6.0 Marshmallow, it feels like someone took an older version of the platform and jumbled up all the menus. It's usable, but it's not as polished as stock Android or the latest UIs from the big boys like Samsung, HTC, and LG.

Having said that, if you're coming from an older phone it's unlikely to bother you. It's pretty smooth and there are plenty of customization options if you want to drill into them.

The default launcher lacks an app drawer, and there's nothing very compelling in the pre-installed app line-up, but Google's apps are all present and correct.

You do get a few wee extras. There's O-Cloud for backing up text messages and contacts, gestures for things like one-handed operation and quickly launching the camera, and quiet time that you can schedule to avoid being woken by alerts.

It's just that everything lacks that little bit of polish to match the high standards set by the phone's exterior.