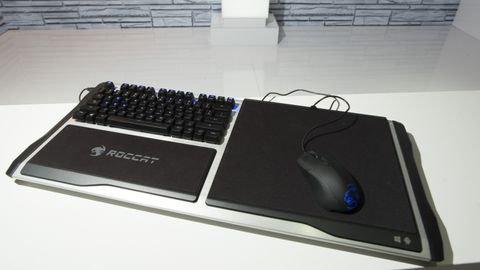 The battery is a bit on the light side and the 3D-printed aspect sounds a little too impractical, but given the proper massaging before its release in 2015 and the Sova could be an essential part of the Steam box experience.

PC gaming is changing. It's nothing new for the decades-old gaming platform, but this time it only revolves around a single set of products - Steam Machines.

How does a wireless keyboard tie into Valve's million-dollar push into the living room? Well, the way it was described to me by a representative of Roccat, the Sova is the next generation of PC/controller hybrids. But we'll decode what that means in a second.

The Sova is MX Cherry switch-equipped keyboard that's been fused onto a hefty aluminum chassis and sports two removable modules for a wrist rest and mouse pad. It's wireless, too.

It works with any mouse with the added benefit that a wired mouse can plug into one its two USB ports and save you the hassle of connecting the mouse to your machine located on the other side of the room.

Why does a PC need a controller anyway? Well, it doesn't. Not yet at least. But that's all going to change in 2015.

One of the Steam Machine's biggest goals is to move PC gaming from the bedroom back into the living room and along with it revitalize the push for couch co-op. It wouldn't make much sense if two players had to share the same keyboard and mouse, though.

The Sova is first and foremost a PC controller. Something for you and a friend to use to create a second set of inputs while playing PC games, and for the most part it works fairly well.

The Sova prototype came in two aesthetic flavors - solid black and brushed aluminum, and under the hood was a set of Cherry MX Black keys that felt firm when pressed.

It was heavy, heavier than it looked anyways. But this makes sense as a lightweight board wouldn't provide a steady foundation for the mouse. Padding on the bottom of the board made it extremely easy on my legs, and didn't hurt after an hour of talking and gaming.

On the side, there are two USB ports and one micro-USB port that's used to charge the Sova. Battery life sounded a bit low in the 6-8 hour range, but supposing that the charging cable is long enough, you could just plug it into the wall when you're running low on juice.

The last and most important part of the design are the modular wrist rest and extendable mouse pad units. While no plan is in place to offer different styles of mouse pads or additional cushions, TechRadar was told that 3D-printer schematics would be provided to print your own modules.

There wasn't any sign of lag between button press and on-screen action. It's a simple request, but the Sova gets a huge checkmark here. And although it's surprisingly heavy, you'll adjust to the weight quickly and realize quickly how necessary this is for a stable base.

The idea of bringing back couch multiplayer is a noble one, and the Sova seems like a one-stop solution to that end.

The 6-8 battery. It's not a huge qualm, but you would think that with so much additional space on the keyboard Roccat could easily increase the battery's capacity and recharge speed. (It'll take about four hours to go from no- to full-power.)

The DIY-ness of the Sova sounds a bit sketchy too. 3D printed technology is great - we love it, but not selling quality modules to consumers seems like a major misstep.

The Sova is a cool concept. It's an intelligent way to rehabilitate couch co-op, borrowing the concept of a controller from consoles. The battery is a bit on the light side and the 3D-printed aspect sounds a little too impractical, but given the proper massaging before its release in 2015, and the Sova could be an essential part of the Steam box experience.