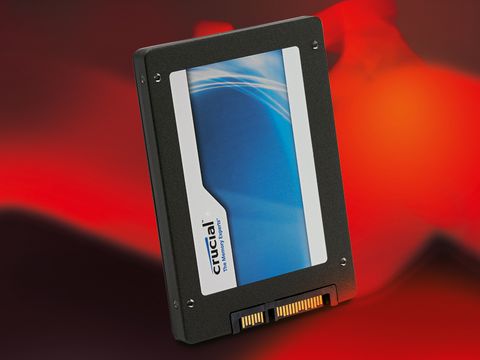 A great all rounder, and nifty with incompressible writes, but needs a price cut to be compelling

Hand on heart, you know that drives with the latest SandForce SF-2200 series controller are probably the quickest you can buy. Is there any point in looking elsewhere? Well, yes.

Price and reliability also come into the equation. Enter the Crucial M4 from one of the biggest outfits in memory. The new M4 256GB is hardly a slouch thanks to 6Gbps SATA support and 415MB/s read and 260MB/s write ratings. Not long ago, those would have been absolutely spectacular numbers.

Admittedly, not so much today, but then again the M4's input-output operations per second (IOPS) performance which is around the 40 to 50K mark is far from shabby and should make for strong real-world performance.

As for what makes the new M4 tick, it sports a mildly reworked version of the older Crucial C300's Marvell 9174 controller. As before, it remains an eight-channel controller, just like the SandForce SF-2200. Of course, the C300 was one of the first SSDs to offer SATA 6Gbps support, so it's no surprise to find the M4 does likewise.

As for the flash memory chips, they're the latest 25nm NANDs from parent company Micron. The chips are fabbed in a joint venture with Intel. Oddly, Micron badged chips from this venture are rated at 3,000 write/erase cycles to the 5,000 of the same chips from Intel. In theory, that makes the Intel chips longer lasting.

The moral of the story here is take such specs with a healthy pinch of salt. Much depends on how a given vendor chooses to validate its products. Indeed, it's also worth bearing that in mind when comparing two totally unrelated drives.

Of course, real-world longevity takes years to shake out. What we can comment on, however, is performance. The headline sequential read and write performance exceeds Crucial claims, clocking up 440MB/s and 286MB/s respectively. That's still quite a bit slower than drives powered by the latest SandForce SF-2200 controller, but then the Marvell 9174 controller doesn't do the same uber data compression thang as the SandForce.

But hang on, because that's not always a bad thing. When it comes to shunting incompressible data around, like music and video, the Crucial M4 takes much less of a performance hit. It's 50MB/s faster with incompressible writes than the mighty OCZ Vertex 3.

It's pretty darn nifty in our file decompression and game install benchmarks, too, running the Vertex 3 very close. It's also a little larger at 256GB rather than 240GB. All of which makes for a pretty interesting alternative to the defaultoption OCZ Vertex 3 and its SandForce controller.

Or at least it would were it not for the fact that the Crucial M4 is typically £20 more expensive. It's not a massive difference, but it's definitely in the wrong direction.