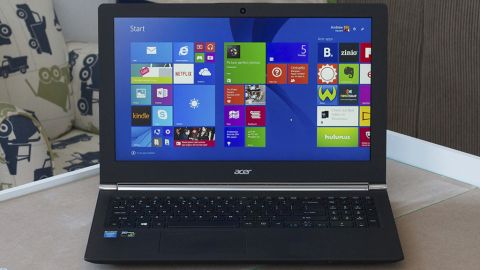 The Acer Aspire V15 Nitro Black Edition turned out to be a nicely powerful gaming laptop at a fair price, but clearly some corners were cut to get there.

If gaming is your main driver for buying a new laptop, prepare to break the bank. The Razer Blade seems to have it all, but it's also pushing a $2000+ price tag. What if you want to spend only half of that and still have a capable rig?

But for all its potential, the V15 Nitro also comes up short in a couple of key areas: the battery life is poor, the 15.6-inch 1080p display isn't great, and the lack of an SSD means it's not the fastest laptop around for day-to-day use. However, does this Acer laptop have enough raw performance to compensate for those concessions?

Compared to some of its entry-level gaming laptop contemporaries, the V15 Nitro is decidedly subdued in its design. Sure, it has the red backlight subtly pouring out from beneath the keys, but you won't find any aggressive branding like on the Asus GL551, nor does it have exaggerated angles and curves like the Lenovo Y50. That's a matter of preference, of course, but I like a simpler build that doesn't try to shout, "Hey, I'm a gamer!"

The laptop has a black plastic shell that is lined with hundreds of ultra-thin ridges spanning the entire height of the laptop, with a glossy silver Acer logo plastered on the left-center. The screen is attached to a glossy, silver hinge on either edge, leaving a gap for the middle chunk, which is also silver and has "Aspire V Nitro" etched into the plastic.

That shiny silver part extends to the bottom of the device and is where all of the hot air is blown out. And it's effective, since the laptop never got alarmingly warm during use - however, the fans can get a little loud during peak usage). The black plastic bottom is otherwise rounded at the edges to create a bulging effect, and you'll find additional ventilation as well as four speakers behind grates on the right and left sides.

The screen takes a bit of force to pull up, and the resulting creaking sound/feeling didn't fill me with a lot of confidence. But once open, there's a lot of space with a large rubberized palm rest surrounding the touchpad to do what you need to do. I'm disappointed that gently removing a large sticker detailing the V15's features left some discoloration behind, however.

The keyboard itself is great - quiet, responsive keys and the lighting effect isn't overbearing. I'm less impressed with the touchpad; my fingers dragged on the surface (which has "Black Edition" written in the upper left), and it bends easily under pressure, which feels a little clunky in practice. But it's a gaming laptop, right? You'll want an external mouse for most games, anyway.

Looking for the ports? Nearly all of them are concentrated on the right side of the V15 Nitro. You'll find three USB 3.0 ports, an HDMI port, a headphone jack, and a fold down Gigabyte Ethernet jack, and the power plug is neatly aligned towards the back of the unit. The only exception is an SD card reader slot covertly tucked along the front edge of the laptop, which makes it quite easy to miss.

Having most of the ports all in one cluster on the right side isn't the friendliest design for anyone planning lots of peripheral plug-ins. With everything on one side, you may need to run cords around the back for anything you're using to the left of the laptop. Plus the USB ports are so closely aligned that a bulky cord or flash drive can block access to the other.