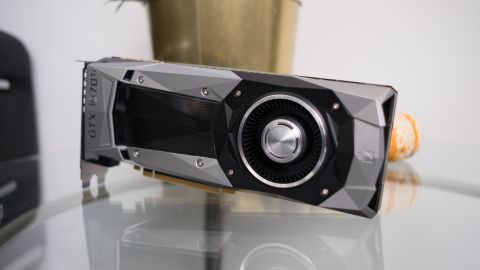 Just when AMD was getting comfortable with the RX Vega line-up, Nvidia has decided to crash the party and release a buffed up 1070, the 1070Ti. Nvidia has built this to go up against the RX Vega 56 and to sit pretty between the 1070 and 1080 in their own GPU line-up.

While we’ve previously seen Ti versions of cards, like the GTX 1080 Ti, GTX 1050 Ti and GTX 960 Ti, this is a first for the company’s former mid-range card. Nvidia has slowly elevated the status of its x70 card from the celebrated mid-range GTX 670 to the high-end prominence the GTX 1070 knows today, and so it was inevitable we would see a Ti version of it too.

This late year surprise by the green team has all the makings of a classic coup d'état, does it outmuscle the competition?

Like all the founder’s edition cards before it, the 1070Ti dons the familiar, silver and black chassis with the aesthetics remaining intact right down to the tee. It borrows the five-phase dual-FET power supply from the 1080, which means a TDP of 180 watts. Nvidia has also improved the copper air chamber for better cooling but we are not sure the single fan will be able to take the heat when you overclock this puppy.

As far as the specifications are concerned, Nvidia decided to send its GPU prodigy to the gym to gain some extra muscle and that extra mass comes dangerously close to the 1080. The 1070Ti has 2432 CUDA cores, which is just shy of the 2560 cores that it's bigger brethren ships with and has 8GB of memory running at 8Gbps. There are some cutbacks here made by team green to make sure it doesn’t cannibalise its own line-up. For starters it doesn’t get the fancy GDDR5X memory the 1080 uses, opting instead to use the same memory set-up as the 1070 which is GDDR5 based. Nvidia also restricts the base and the boost clocks to 1607 and 1683 MHz respectively on the founder’s edition and on all third-party boards. It doesn’t mean it can’t go over those values, it just means it won’t ship with more out of the box.

For all its frame-rate crunching prowess, the 1070Ti remains stable and relatively cool. On an average we found the card to idle between 46 and 49 degrees Celsius and reach a maximum 82 degrees under full load, these numbers hold true even when bumping up the resolution to 4K, which is impressive. However, the high watermark of 82 degrees also means that it probably won’t be able to handle overclocking very well, at least on the founder’s edition with the stock cooler. If you are someone who wants to overclock, then you might as well look for a partner board with better cooling solutions.

The 1070Ti consumes more power than a normal 1070 thanks to the five-phase dual-FET power supply borrowed from the 1080, we saw power consumption reach a maximum 190 watts, which makes it quite power hungry. It is yards better than the RX Vega though, which throws up some ludicrous numbers.

Now we come to the meat and potatoes of this review. How does the card perform? To start with let’s show you the rig we are testing with.

For the DX12 tests we ran Timespy at 1440p which returned scores of 6663 points. At extreme, which is the same test rendered in 4K, the Ti put up an impressive fight accumulating a graphics score of 3036 points.

Rise of the Tomb Raider

Battlefield 1’s 1080p performance was pretty stellar as well recording an average of 112fps at everything pushed up to the maximum, at 4K, the Ti managed a frame rate between 54 and 56fps.

Overwatch ran at an average of 112fps at Epic settings custom tweaked to take every slider as high as it will go at a resolution of 1080p. At 4K, that number came down a bit but still hovered over 60fps averaging somewhere between 65 to 70fps.

While great for overclocking, moving up the 180-Watt TDP class comes with the unfortunate effect of higher energy draw. In our testing, the Nvidia GTX 1070 Ti is just as power hungry as the Nvidia GTX 1080 – and, in some cases, even more so.

Similarly, the GTX 1080 Ti reaches only slightly higher temperatures than its older self, though, 77 degrees Celsius is still well within the safe operating zone of the Pascal architecture.

It’s clear if we analyse the performance, that 1440p is the sweet spot for the 1070Ti. It’s an amazing card that just inches out the RX Vega 56 in performance. In India, the card will retail for Rs. 39,000 which is inclusive of taxes, while that’s a good price, you have to consider that Zotac 1080 boards are now starting to retail starting at Rs. 41,000, while the leaner GTX 1070 boards are now retailing at Rs. 30,000. It’s an interesting dilemma to find yourself in, The 1070Ti is definitely better than the 1070 and worth the extra Rs. 9,000 or so but at the same time at just Rs. 2,000 more, the GTX 1080 beckons. We would have liked to see Nvidia be a little more aggressive with the pricing. Anyway you slice it, the 1070Ti is a great card, buy it, you won’t be disappointed.