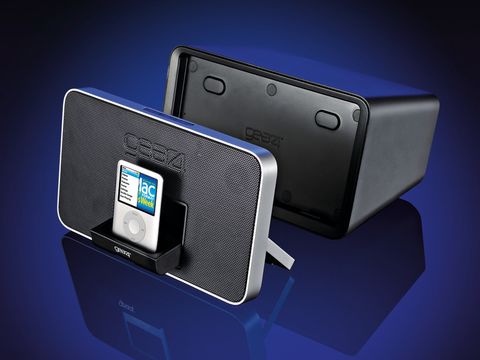 The overall build quality of the Duo is impressive

Not bad at all. Would make a welcome addition to any desktop, bedroom or kitchen

Speakers for iPods come two-a-penny these days, but the Gear4 Duo caught our attention, mainly because it's surprisingly good for the price.

It also has a clever design that splits into two parts, so you can release the slim speaker from the bass bin section and use it alone on battery power for short trips.

The overall build quality is impressive. The drivers - the cones that actually produce the sounds - are well protected behind a metal grill and the mechanism that locks the two parts of the hi-fi in place is both well thought out and solidly constructed.

The fold-down iPod dock is also good quality and, unlike as can happen with similar docks, the iPod didn't wobble in its hinge. This gave us some optimism about the life expectancy of the Duo.

The sound quality is acceptable, if not in the SoundDock or iPod Hi-fi league. Without the bass part attached the music is not terribly engaging from all areas of the room, but on a desktop close to your ears it does a good job. It will strain to power a party, but can easily brighten up the atmosphere.

Docking with the bass instantly gives the unit that much needed bottom end, bringing out the melodious bass line of Cornell Campbell's Press Along Natty, among others.

The front speaker uses magnets at the top and a plastic tongue and grove at the base. It clips in and out with no fuss at all, though there's a very slight pause in the playback as you slot it home.

It also detaches while playing nearly continuously, too. Inside the front speaker panel is a rechargeable lithium battery that's good for two hours, and a second empty battery slot for another battery, should you wish to buy this accessory.

You also get a remote, which worked well for us and includes iPod controls in addition to the normal browsing buttons. With this, you can choose to shuffle the playlist - a feature you can't command with the buttons on the speaker alone.

The feature set is fine as far as it goes, but you don't get a video-out for sending movies to a screen while playing the audio through the speaker, and you don't get a USB sync port for docking with your Mac's iTunes library.

Gear4 often underwhelms us with its bargain-basement products, but the Duo is an impressive release from the company and, we hope, a sign of good things to come.

Though we do suggest also previewing the speaker units from Altec Lansing at the same price point, along with the Tannoy i30.