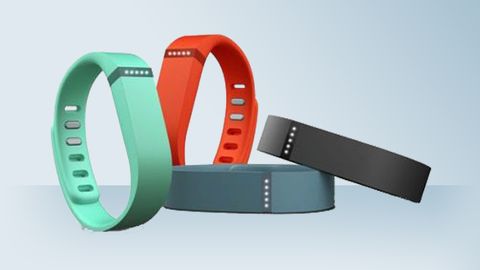 It's not quite as flexible as you might hope

Update: The Fitbit Flex is now a little harder to come by as it has been replaced by the Fitbit Flex 2. We gave it three and a half out of five stars, but praised it for a comfortable, water resistant design as well as fun software. If you're sold on the Flex, you can pick it up on the cheap.

Announced at CES back in 2013, the Fitbit Flex combines the step-counting technology that made its One and Zip products so useful, and places it on the wrist for convenience.

This big design change has some pretty big advantages. For a start, the fear of having the small sensor pop out from a pocket while walking is gone. With the wrist mounted option, you always know where the device is.

The second major benefit is for sleep-tracking. While the Fitbit One offered the ability to track sleep by slipping the sensor into a soft, velcro arm band, the Flex leaves the sensor permanently attached, allowing you to switch modes without removing the device at all.

In fact, thanks to a firmware update in December 2015, you no longer need to even switch sleep tracking on – it will do it for you automatically.

Unlike the Jawbone Up, the Flex consists of two separate parts - the sensor and the strap. The sensor itself is smaller than the One, thanks to the fact that it doesn't include an LED display.

Instead, five LED lights indicate the number of steps taken during a day, and are only activated by double tapping the device.

The rubber wristband is lightweight, but a little simplistic in its design. Unlike a watch strap or even a bracelet, the Flex uses a plastic grey latch to poke to plastic prongs into a series of holes on the band.

Getting the Flex closed the first time can be challenging, but it does quickly become second nature. It's not as comfortable or effortless as the Jawbone Up, but it is functional.

A whole range of colored straps are available for Flex users, which allows users to customise the look of the device to suit their own personality. And because the actual counter simply pops into the strap, you can chop and change, unlike the Jawbone devices.

The Flex strap has even opened up to third party designers, so you can now buy gold and silver bracelets from designers like Tory Burch.

These bracelets aren't exactly cheap – but they do have a certain elegance to them that no other wrist-bound fitness tracker is offering. They're also completely optional.

One other noteworthy aspect of the Flex band is the clear bar that sits above the LED lights in the actual tracker unit. This band allows you to view your progress while wearing the band.

But after a few weeks, that clear band was already showing signs of wear and tear, with scuffs and scratches, despite a blatant lack of gruelling conditions.

Of course, Fitbit offers a range of bands in a variety of colours, which might be a nice way (although expensive) to work around this problem.

Power to the people

One of the most immediate joys of using the Fitbit Flex over the Jawbone Up is the inclusion of Bluetooth 4.0 wireless syncing. Instead of having to manually remove the device and plug it into your phone to sync, the FitBit will periodically wake up and connect to your phone, keeping your stats up to date.

The catch is that at the moment, wireless syncing to mobile still only works with a very limited number of devices.

While device support has improved dramatically since our initial review, adding both flagship Android devices and the latest iPhones, it's still far from perfect.

We tried to pair the Flex with an Xperia Z2, and got wholeheartedly rejected. Then a couple of weeks later it just started working.

While this is currently a major frustration for Android users, there is good news on that front with Google announcing Bluetooth Smart support as part of the OS, which should theoretically give Bluetooth 4.0 syncing support to a much wider range of devices.

Support for the Flex has also arrived on Windows Phone 8.1 devices, which is welcome news for all the Live Tile lovers out there.

The Flex does also come with a small USB dongle for syncing to Mac or PC. It works well, but is nowhere near as elegant a solution as the mobile syncing.

One thing that does work in the Flex's favour is battery life. Despite the inclusion of Bluetooth for wireless syncing, the Flex still managed to almost match the Jawbone Up for longevity when worn side by side.

While the Up can be pushed to 9 days of use - depending on how active you are - the Flex tended to last seven or eight days.

Sure, that's a step down, but the convenience of wireless syncing makes it all worthwhile. Especially given it also offers some kind of real time indication of your daily progress in the form of five LED lights, while the Up has nothing.

The question of accuracy

Like a high-tech hipster, we tested the Flex by wearing it on our weaker arm, with the Jawbone Up right alongside it. Despite the proximity of the two devices, the results were quite varied.

On the sleep front, the Jawbone was easily the stronger device. Nights spent getting up and down to unsettled children were accurately broken up by the Up as times awake, while the Fitbit app claimed that sleep was just a little unsettled.

But when it came to step counting, the devices offered such varied results that you had to wonder how they could both claim to count the same thing.

Without fail, the Flex reported a significantly higher number of steps taken than the Up. On a day where we conquered our 10,000 step goal on the Flex, the Up would bring us back to earth by reporting only 8,000 steps taken.

To test which of the two was more accurate, we physically walked 200 steps, counting as we went. Neither device tracked the steps 100 per cent accurately, although the Flex did come up slightly closer to the mark.

How that extrapolates to larger numbers is unclear, but there's a real question mark over the accuracy of the wrist-mounted device, which is something we didn't encounter with the pocket-mounted One or Flex.

Fitbit's app is easy enough to come to grips with for even the most novice of users, but does let you drill down into more and more layers of information.

That said, it still struggles with food tracking thanks to a lack of internationally localised cuisines, although that is something that can be worked around thanks to the third party app ecosystem and services like MyFitnessPal.

There have been some massive improvements over the past few months with the Fitbit app, allowing a much easier social connection to friends to allow you to harness that competitive edge.

Fitbit has also launched IFTTT compatibility, which will automate many functions and help improve the overall function of the device with very little effort.

Which goes back to the verdict we came to in our Jawbone Up review, that the Fitbit is a much more useful fitness tool, while the Up is a lifestyle tech accessory.

The Flex does start to veer to the accessory side of the fence with its design, but it's app keeps it firmly in the fitness tool category.

The Fitbit ecosystem is a great way to start using technology to keep on top of your personal health.

While the Flex is starting to show its age a bit, like a fine wine it has actually improved with time. The fact it's now more affordable is also a welcome one.

But there's a lot of competition in the fitness tracker space now from different companies, as well as the Fitbit Blaze, Fitbit Charge 2 or even the Fitbit Flex 2.

There is still the question of accuracy, with high step counts seemingly too-easy to obtain thanks to inaccurate algorithms.

The wristband itself could also use a little more work. It's lightweight and comfortable, but looks more like the watchband on a kid's watch than a truly stylish piece of tech. Fitbit has addressed this with third party bands, but for most people they are a little too highly priced and opulent.

All that said though, Fitbit has shown the strengths of its platform. Wireless syncing is essential in this product lineup, and having a strong app ecosystem is a huge benefit to fitness trackers out there.

With the Charge, Charge HR and Surge all available now, the Flex is a great starting point for anyone looking to join the Fitbit market. But it's far from the company's best product.