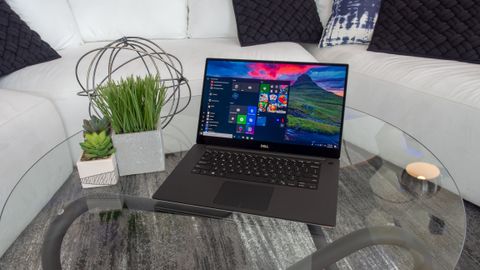 You’ll get a more powerful Dell XPS 15 than its preceding models.

The Dell XPS 15 for 2019 fixes the laptop’s most blatant flaw – the webcam placement – but doesn’t change much more than this beyond some updated components. This feels like a wasted opportunity to place Dell’s flagship 15-inch laptop in line with the rest of its redesigned XPS range.

When Dell unveiled the updated Dell XPS 15 (2019) at Computex 2019, it felt like the laptop was only a footnote in a far more exciting announcement. Especially considering that the company went to the event with a few exciting new designs on some of its flagship 2-in-1 laptops and gaming laptops like the Dell XPS 13 2-in-1 (2019), for example.

Not that the Dell XPS 15 (2019) is devoid of much needed updates. For one, the webcam is finally back in its rightful place above the screen, so whoever you’re video conferencing won’t have to look up at your nose anymore. And, the internal components are much more powerful than last year.

However, that’s the extent of what this laptop has to offer this year. You’ll get a more powerful Dell XPS 15 than its preceding models. Just don’t expect anything like the totally new directions to which Dell is taking with its other flagship products that debuted at Computex.

If you’ve got an aging Dell XPS laptop though, this might just be a good opportunity to update. And, with Black Friday and Cyber Monday just around the corner, Dell might have some money-saving deals to offer.

This specific configuration is unavailable in Australia, where the maxed-out model has the same internals, but with the storage limited at 1TB. This will cost you AU$5,199.

You’ll likely to get access to those improved Nvidia graphics somewhere in between the extremes of the available configurations, as has been the case in the past. We do know that the minimum amount to get that stunning OLED display will be $2,018/£1,868/AU$3,499.

So, you’ll likely see an impressive increase in performance out of this year’s Dell XPS 15 for not much more than the current price of the XPS 13.

We’re happy to see that Dell has finally moved the webcam from below the display to its rightful place above it. Unfortunately, we’re also dissatisfied with just about everything else in the Dell XPS 15’s design, as it had stayed largely the same. If Dell had already invested time and effort in changing one vital element in the design, wouldn’t it have made sense to take the opportunity to reassess other aspects of the XPS 15’s look and feel as well?

We would have loved, for example, to get either a set of top-firing stereo speakers or a number pad on the keyboard to utilize all that extra space on either side of the keyboard.

Regrettably, you’ll pretty much have the same design as the last one or two models of this laptop: an aluminum-clad lid and base with a black carbon fiber palm rest enveloping the keyboard. This design has worked adequately for a while, but now it feels and looks a little antiquated, especially next to the completely fresh-looking and -feeling Dell XPS 13 and XPS 13 2-in-1 for 2019.

To be fair to the XPS 15, however, Dell did give its keyboard a bit of adjustment this year, if only to revise the font on the keys so they’re not as robotic-looking and much closer to the hipness that is Helvetica. Also, not all unchanged aspects are bad. The travel stays the same at 1.3mm, and the feedback force feels as solid as ever after our brief testing. The trackpad has kept the same design as well, with glass coating, and just as smooth and accurate as ever.

Dell’s real focus here, obviously, was to furnish its leading ‘prosumer’ laptop with an OLED display, which was a bold effort. The sizable 100,000:1 contrast ratio is immediately evident upon looking at the screen, with blacks that simply fade into the laptop’s thin bezels.

Dell informs us that this display is intended to support content creators with its 100% DCI-P3 color gamut. It’s not quite as bright as other screens at 400 nits max, leaning on that enhanced contrast ratio to pick up some of the slack left behind by the decrease in brightness.

The laptop also keeps the same weight at just 4 pounds (1.8kg) with the standard display and 57 Watt-hour (Whr) battery, and now at 4.5 pounds (2kg) with the OLED display and a 97Whr battery. Similarly, the laptop remains as thin as ever – just 0.66 inches (17mm) across the board. Lastly, the ports are the same, with two USB 3.1 ports, one USB-C port with Thunderbolt 3 and PowerShare, an HDMI 2.0 port, an SD card reader and a headset jack.

There’s only so much we can say about the performance of the new XPS until we actually get a review unit put through its paces. That said, based on the Dell XPS 15 specs, we have a pretty good idea of what we can expect. The combination of Core i9 power across eight cores and GTX 1650 graphics is likely to make this laptop a beast when it comes to handling high resolution images and rendering equally high-res video content.

Likewise, the laptop’s gaming performance should be able to handle a Fortnite session for the professional who wants to squeeze one in at lunch or after work – or any PC games, for that matter, if you’re a college student who still wants to be taken seriously in class. The amount of RAM this laptop offers simply demands multitasking worthy of the hardware.

As for battery life, Dell promises quite a lot, allegedly lasting up to a whopping 20 hours and 30 minutes of general runtime on an FHD model, more than 13 hours with the 4K model or more than seven hours on the OLED display. These numbers seem a little too good to be true in our opinion, but again, only a comprehensive review will tell us how accurate these numbers really are.

The Dell XPS 15 for 2019 has addressed what was probably the laptop’s most annoying and glaring flaw – the webcam placement. Additionally, Dell has given its internal components a proper upgrade in almost every category. And, it’s done so while inheriting the great parts from its predecessor.

However, after putting this revision – albeit briefly – through its paces, we’re left wanting. There’s a lot more aspects to be improved here, and Dell could have tackled those this year to perfect Dell’s 15-inch laptop. Unfortunately, Dell played it too safe this year, and the end result is a laptop that’s somewhat improved but still disappoints on a number of points.

We’ll save any further praise or condemnation for the full review of the Dell XPS 15, but right now, we’ll leave it at this: what you’re looking at is a 15-inch laptop that’s set up to nail the basics and not much more.