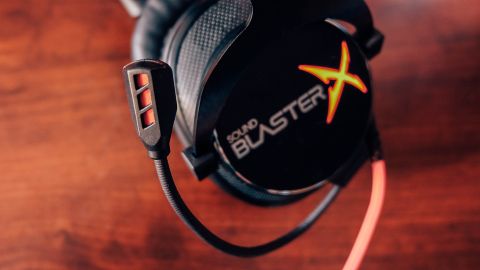 At $99, the Sound BlasterX H7 Tournament Edition is an excellent choice with its superb audio performance, extreme comfort and high versatility.

Whoever said “If it ain’t broke, don’t fix it” obviously hasn’t met the peripheral designers at Creative. The company took its already solid Sound BlasterX H7 gaming headset and gave it a complete overhaul, tightening its performance, appointing it with a more stylish finish and slapping on an even lower price tag to leave gamers salivating.

Yet the question remains: does Sound BlasterX H7 Tournament Edition hold its own against the sea of competitors, price inconsequential? Yes. Yes, it does.

Not to say it doesn’t have its faults—its mids are a little quiet and its high end is a tad hyped for the more organic music genres, for example. But when Creative promised a gaming headset that combines comfort, durability and excellent audio performance, you can bet your bottom dollar they’ve delivered.

Just by looking at it, there’s no denying that the Sound BlasterX H7 Tournament Edition is a gamers’ headset. It’s big and bulky. And its glaring color contrast—red trimmings on black, which this writer happens to personally like—alongside the glowing, pulsating red X on its ear cup plates, (which are activated in USB mode), only intensifies that gamers’ look.

That said, it still exudes a sophisticated aesthetic through a matte finish with soft leatherette padding and a pair of brushed metal ear cup plates. So while you might have the colors of a Special Forces TIE Pilot, you won’t necessarily come out looking like one.

The best thing about this pair’s design is that it’s built for durability as well as for ultra comfort. It’s solidly constructed with a sturdy, steel-reinforced headband and thick (but not too thick) cables that won’t fray anytime soon.

At the same time, it boasts a thick layer of padding at the band, which is snug but also flexible. Meanwhile, soft memory foam inside the ear pads help you enjoy long play sessions or a Lord of the Rings marathon pain free. The detachable microphone is also ergonomic by being so flexible, you can twist, turn and position it every which way, depending on your preference… or quickly tuck it in when not in use.

For convenience, the in-line remote has the micro USB port for digital audio, 3.5mm audio jack, volume control, mute switch and a multi-function button (for playing/stopping music and ending calls). For versatility, it easily connects to other gaming devices such as the PlayStation 4, Xbox 360, Xbox One and Nintendo Switch.

Where you’ll really get your money’s worth is with Sound BlasterX H7 Tournament Edition’s excellent sound. Creative asserts that they’ve upgraded the 50mm FullSpectrum drivers from the previous model to deliver an even clearer and more accurate sound.

Sure enough, this headset sounds perfectly tuned for gaming and watching movies, with superb clarity, low noise-to-signal ratio, plenty of headroom and an EQ curve ideally tailored for gaming.

While playing Horizon Zero Dawn for example, we noticed that the explosions in boss fights did not overpower the headset. Despite there being several things happening at once—explosions, arrows flying, machines moving, background music—we could hear each sound effect distinctly. This kind of immersive experience was also apparent while watching movies such as Dunkirk.

Enhancing the clarity and sound separation is the earcups’ tilt driver design, which essentially minimizes resonance between the earcups and your ears.

(Note that the BlasterX Acoustic Engine Lite comes free with the H7 Tournament Edition while the Pro is for purchase.)

Of course, nothing’s perfect and this particular model’s shortcomings are that its mids are a little quiet and its high end is a little prominent. These made some music genres like rock, jazz and country sound flat and slightly sterile… although EDM and pop did sound fantastic.

As far as the ergonomic mic, it’s also very directional, which means it does a good job of keeping background noise separate from your actual voice, allowing it to come out crisp and clear.

This gaming headset’s compelling 7.1 surround sound is perhaps its coolest, if not best, feature. It gives the headset a bigger soundstage and you, a very immersive experience.

Still, it’s an awesome feature that’s executed quite nicely in this model. You can clearly hear sounds moving from left to right or towards you. You can also easily place where characters are in any direction except from behind, which gives you the advantage of immediately knowing your enemies’ positions. And sound events sync with your position and movements and adjust accordingly with precision.

Overall, the Sound BlasterX H7 Tournament Edition is an excellent gaming headset that offers that superb audio performance you expect from a competitive gaming headset and couples it with user comfort, versatility, a sleek design and that immersive surround sound environment. For $99 (£89, AU$169) a pop, you’re definitely getting a lot of bang for your buck.