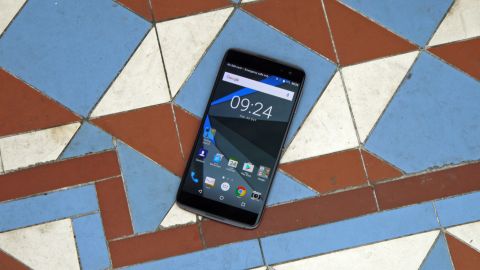 While many Android handset makers are hell-bent on making their own mark on the Android operating system, BlackBerry has shown remarkable restraint with the DTEK60. To the casual observer the user interface looks practically the same as what you'd expect to see on stock Android devices like the Nexus 5X and Google Pixel.

This is most definitely a positive thing; the more modifications a manufacturer makes to the interface, the greater chance there is of bugs and compatibility issues being unwittingly introduced, and the additional time needed to customize the interface means software updates lag behind those seen on Google-branded devices.

Such is BlackBerry's willingness to dance to Google's tune that the DTEK60 doesn't come with custom music and media apps.

Instead, the phone ships with Google Photos and Google Play Music as standard. If you're an existing Android user then you'll likely prefer these apps anyway, and use them over the largely pointless variants which ship on phones from the likes of Samsung, LG and Sony.

Like so many of Google's apps, cloud storage makes these almost indispensable, and when you switch to a new phone you don't have to worry about losing your photos, videos, music or files. By sticking with Google's offerings, BlackBerry has skillfully avoided the needless duplication of features that so often plague Android devices.

While BlackBerry is happy to keep the core interface close to Google's own vision, the company has introduced new ideas of its own which really set the DTEK60 apart from its Android rivals – some of which work better than others.

The most notable has to be the BlackBerry Hub, a unified inbox for all your emails, text messages, tweets, calls, calendar appointments and instant messages.

Designed to look like the Gmail app, this all-in-one option does an excellent job of pulling together all your vital messages in one place, but if you're used to Android's already robust notification system then its value might be slightly diminished.

We personally find it a little overwhelming to see all of these notifications in a single app, but your own experience may vary, especially if you dislike having to hop between applications to respond to alerts.

Interestingly, this isn't totally unique to the DTEK60 or even BlackBerry phones, as it can be downloaded to other Android devices via Google Play.

BlackBerry has pre-loaded some of its own security-conscious apps, which are clearly aimed at business and enterprise users. WatchDox is a secure file-sharing tool with in-depth permission management, while underlying functionality is secured by high-level encryption across instant messaging, email and apps.

The DTEK security app is the perhaps the most visible element of BlackBerry's quest to eradicate any vulnerabilities, and runs in the background at all times, monitoring elements such as app permissions, data encryption, operating system integrity and even the suitability of your screen lock.

Should any area not pass muster, DTEK will warn you of this and encourage you to take action.

Finally, there's BlackBerry Password Keeper, which secures all your precious log-in details using AES-256 encryption and a single master password. In a neat touch you can also write secret notes within the Password Keeper to keep them away from prying eyes.

BlackBerry boasts that the DTEK60 is the most secure Android phone ever made, which is kind of like bragging that you've got the world's best chocolate teapot – Google's operating system doesn't have the best reputation when it comes to overall security, largely thanks to the fact that most Android phones can be rooted for customization and thereby exposed to all kinds of attacks.

Even so, BlackBerry is deadly serious about locking down its phones, and at the time of writing none of its Android devices have been rooted. The DTEK60 is designed to only function if the bootloader remains completely secure, and regular security updates are issued each month.

There's also what BlackBerry calls the "Hardware Root of Trust", with security keys being added to the processor which track, verify, and provision each device. All of this might seem like overkill, but it's important to remember that BlackBerry's focus is on business users who share confidential corporate data.

Elsewhere, BlackBerry has added pop-up widgets to the core Android interface. These work like 3D Touch pop-ups on iOS, but instead of a push you swipe up or down on the app icon.

This opens up a window which shows the available widgets for that application; pick one and the next time you swipe, you'll see the information presented by that widget. It's a great middle ground for those who like to see data at a glance but don't want massive widgets taking up their home screen.

There are also gesture controls, which allow you to open a particular app simply by swiping in a certain direction from the home button, and BlackBerry's own "Intelligent Keyboard", which learns how you type and comes with speedy "swipe to type" input.

After using the keyboard for a while we found ourselves reverting to Google's standard keyboard – available from the Google Play Store for free – but BlackBerry's effort is certainly one of the best custom efforts we've seen in a long time, which is unsurprising when you consider that physical keyboards were its key USP not so long ago.

Finally, we have the Productivity Tab, which sits on the side of the screen and can be opened with a swipe from the edge of the display. From here, you get an overview of your upcoming events, text messages, open tasks and your available contacts.

While it initially seems like a useful feature to have, the longer we spent with the DTEK60 the less we actually used it.

Annoyingly, we only remembered its existence on the numerous times that we accidentally opened the tab when performing other actions. Thankfully, like almost all the additional features BlackBerry has added into this handset, the Productivity Tab can be disabled entirely if you wish.

The DTEK60's large and striking AMOLED screen is predictably a great platform for watching movies and playing games.

However, its high resolution does mean that certain intense 3D games run less smoothly than on phones like the Xiaomi Mi5, which boasts the same Snapdragon 820 chipset but has a more manageable 1080p screen that places less strain on the internal hardware.

It's by no means a deal-breaker though, and gaming on BlackBerry's blower is still an enjoyable experience.

Audio is a much more agreeable affair, thanks to the DTEK60's unique stereo speaker setup. There's a speaker at the top and bottom of the device, but the grilles which allow the audio to pass out are present on both the front and back of the phone, offering 360-degree sound.

The speakers are powerful and clear, making this a great option for listening to tunes sans headphones.

Thanks to the bundled Waves MaxxAudio app, you can fine-tune the sound by tinkering with variables such as bass and treble, and these alterations carry across the entire interface, not just music playback. The results are best appreciated when using a set of headphones.

The DTEK60 is among the first of BlackBerry's Android-based devices to really boast flagship hardware specifications, and its high-end specs show in the overall performance of the phone.

Keeping the operating system close to stock Android will have no doubt helped in this regard, and we never encountered any pauses or stuttering, even when the handset was performing several different processor-intensive tasks at once.

For some unknown reason the Geekbench 4 benchmark refused to work on the DTEK60, but we did get AnTuTu running and it returned an excellent score of 147126, which is in line with other Snapdragon 820-powered devices – in other words, the DTEK60 delivers flagship performance.