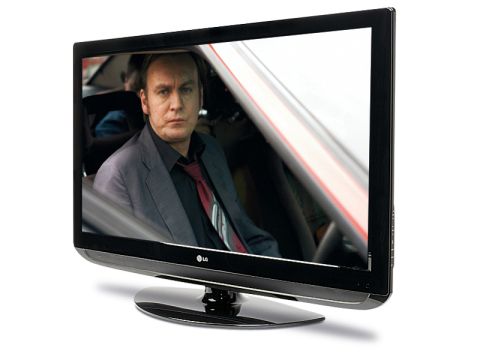 If the Freeview Playback functionality appeals, the 37LT75 adds up to a very attractive package

If you're one of the many households in the UK that can't afford a Sky subscription, the LG 37LT75 may be the perfect upgrade for the impending digital age.

That's because it's one of the UK's first Freeview Playback TVs, which means it carries a built-in hard disk recorder (160GB) and twin digital tuners, so you can record, pause, chase and even series-link programmes in much the same way you can with a Sky+ satellite receiver.

What's more, since the TV records the digital tuner directly, the resulting images ought to be identical in quality to the original broadcasts. Excellent.

The only real limitation of the 37LT75's Freeview Playback system is that it will only let you record one channel at once, not two.

The chassis that's home to this groundbreaking capability is a pretty one and overall the price looks fair, but the connectivity isn't anything special, only providing two HDMIs when we'd like to see three. But maybe this is forgivable given the relatively undemanding customer this TV is aimed at.

Other aspects of the TV's feature count are really rather good. For instance, you get LG's XD Engine image processing, with its focus on improving colours, black levels, sharpness, motion and noise levels.

The set will also take 1080p/24fps feeds from Blu-ray players, despite only having a 1,366 x 768-pixel resolution, and boasts a contrast ratio of 8,000:1 delivered by a dynamic backlight system (which dims the brightness during dark scenes to boost black levels).

Accessing all the 37LT75's features and recording, incidentally, is a doddle, thanks to an excellent operating system.

Recordings from the digital tuner look identical to the original broadcasts, with no added noise. The screen's picture quality is pretty good overall, too.

Particularly notable is how much cleaner and more natural standard-def playback looks compared with all LG's non-Freeview Playback TVs to date.

The 37LT75 renders HD with impressive precision and detailing for a non-full HD screen.

Colours are likeably vibrant, too, for most HD and SD viewing alike, and the set's motion handling is also good, with only minor resolution loss as objects cross the screen.

Lastly, the set's audio is perfectly adequate, given how small its speakers are.

The 37LT75 falls short of an unreserved recommendation, though, as its black levels are only solid and its 1080p/24fps playback suffers some nasty juddering