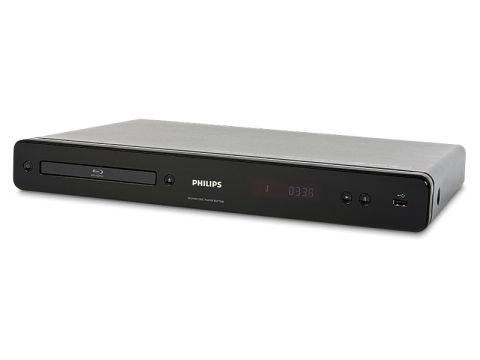 An impressive Blu-ray player with nifty features and superb pictures, but you can get more for your money from rival brands

The flat, gloss black front panel of the BDP7300 oozes class, with only a few buttons to clutter it up and a USB port on the right hand side for playing back digital media.

The build quality is also stronger and sturdier than you might expect from a £250 player.

Being a Profile 2.0 player, the BDP7300 lets you download extra movie content using the Ethernet connection on the rear. But unlike most other BD Live decks, the Philips comes equipped with 1GB of internal memory, which means you don't need to connect a USB memory stick to store downloads. There's no Wi-Fi support though, so cable-haters beware.

The 5.1-channel analogue outputs are always nice to see on a budget deck, as they enable users without HDMI-equipped receivers to enjoy the delights of HD audio. The player decodes and outputs Dolby True HD and DTS HD Master Audio, but it's a shame Philips couldn't stretch to 7.1-channel outputs.

The deck's format support is solid, playing back all the regulars such as MP3, WMA, JPEG (in HD) and DivX Ultra, as well as more unusual AVCHD, WMV and even WMVHD formats, but with our Coral Reef Adventure (720p) file it would only play the video and not the audio track. There's no DivX HD or MKV support, though.

The BDP7300's operating system is superb, taking a fresh approach to onscreen design without sacrificing user-friendliness. The GUI revolves around a three-option 'Home' menu that enables you to play a disc, access a USB device or enter the setup menu.

The setup menu fills the screen completely and is easy to read, plus it's laden with stylised icons and helpful touches such as dialogue boxes that appear when you linger on an option for a few seconds. The USB menu is split into music, video and photos and the straightforward layout makes it a breeze to find your desired content.

Owners of Philips TVs will appreciate the remote, which uses the same fonts and icons. Truly ergonomic, the layout is spot on and the rubbery feel of the buttons makes them comfortable to press. There's a large circle for controlling menus and dedicated buttons for changing the HDMI resolution, accessing BonusView and calling up the Home menu. Press any of the control buttons during playback and the corresponding icon pops up in the middle of the screen before fading away.

Disc loading speeds are excellent. We slipped Spider-Man 3 into the tray, hit 'Close' and the Sony Pictures video started playing 34secs later, putting it towards the top of the speed leader board, together with the nifty Samsung BD-P3600 and the LG BD370.

Video performance is excellent. The procession of tricky tests on a Silicon Optix HQV Blu-ray are handled with reassuring confidence. The Video and Film Resolution Loss sequences are reproduced without any flickering in the corner boxes, while the rotating bars on the diagonal filter pattern are rendered with smooth, step-free edges. Also impressive is the lack of moiré flickering on the panning shot across Raymond James stadium.

It fares equally well with movie material, presenting Warner's superb 1080p transfer of The Curious Case of Benjamin Button with scalpel-sharp clarity. Close-ups of aged faces, be they CG-enhanced or natural, reveal tons of craggy detail and delicate skin textures that some lesser decks might struggle to convey. It also renders edges decisively and keeps noise levels to an absolute minimum.

As the Philips displays the lavish settings of David Fincher's globetrotting epic, the depth and solidity of the picture is beautiful to behold, thanks to the punchy blacks and superb shadow detailing. It backs this up with wonderfully realistic and nuanced colour reproduction, delivering smoothly-blended tonal gradations and full-on, bold hues.

Despite being limited to 5.1 output from the analogue ports, the Philips does an impressive job of decoding HD audio. It lends Benjamin Button's decoded Dolby True HD track an open and expansive feel, conveying dialogue, effects and music with lots of warmth and punch.

It also copes admirably with the more frenetic sound design of Hellboy II, blasting out the action scenes at a fast, fiery tempo. The pleasant CD and MP3 playback will neither dazzle audiophiles nor will it disappoint casual listeners.

Thanks to the sturdy build quality, useful feature list and highly impressive pictures, you certainly get a decent product for your money. However, the problem is that there are other players on the market that offer even more for the same price.

We're thinking in particular of the Samsung BDP3600, which throws Wi-Fi support and PC streaming into the mix. If you do opt for the Philips, however, it certainly won't leave you feeling short-changed.