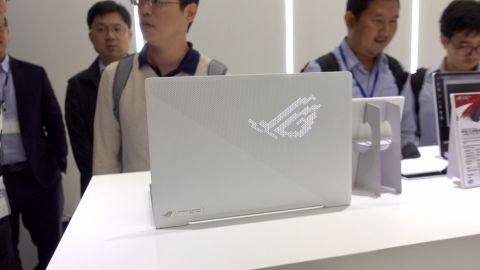 The ROG Zephyrus 14 looks svelte in a premium chassis, runs an AMD CPU alongside the latest gaming hardware. What really stands out it Asus' new customizable crazy LED lid.

Asus went with all guns blazing at this year's CES. The company released a long list of products, but its latest gaming laptop in the Zephyrus series stood out. The new Zephyrus G14 caught our attention majorly because of its sleek design profile and the exciting Anime Matrix feature, which is basically a customizable backlit LED that illuminates in white.

It is the first time that we love an addition that does not particularly enhance gaming, but definitely adds a feel-good factor to the design.

Asus has not announced the release date of the new Zephyrus laptops, but it has hinted that it might launch in India and other countries around the end of Q1 2020 and early Q3, 2020. Asus has yet to release final availability and pricing for the Zephyrus G14.

The beefed-up variant of the Zephyrus G14 features up to an AMD Ryzen 7 4800HS processor, which also marks the comeback of AMD, and according to Asus, we're not sure if we will see an Intel-powered variant anytime soon.

The G14 has up to 32GB of RAM and a max 1TB M.2 NVMe PCIe SSD. What makes it even more powerful as a gaming laptop is the Nvidia GeForce RTX 2060 graphic card with 6GB of VRAM.

Unfortunately, we did not get to run benchmarks or games at the event, but we can confidently say it's one of the lightest gaming laptops with such heavy internals. Although Asus has made big claims about its performance and thermal management, we will still have to test it thoroughly to crown it a "beast" at the performance.

Asus claims of a 10-hour battery backup on this laptop, but that is limited to specific use cases. Battery and thermals are two areas that we're looking forward to testing as soon as we get our hands on the laptop. And that may take some time.

Zephyrus laptops are known to be sleek and lightweight. In fact, ROG is known to make the world's lightest gaming laptops under its flagship Zephyrus-series. The G14 weighs just as light at 3.5 pounds and measures 12.7 x 8.7 x 0.7 inches.

The laptop comes in two colors - gray and white. These colors are quite ordinary, but they have a damp shade because of the magnesium-alloy material, that we liked. The texture resembles very closely to a smooth matte finish and looks very neat. The best part about using this material is that it's very sturdy despite being lightweight.

Asus has also added its much-loved ErgoHinge design to the lid, which raises the keyboard slightly upwards to an angle for a better typing experience. We did some fake typing on it, and it seemed like I can use this for my daily writing without complaints.

That all sounds good, right? But the feature that makes it stand out is the Anime Matrix, which is essentially a set of 1,215 mini LEDs behind the display, which can be used to display graphics such as animated GIFs or text. While there aren't many use cases right now and the control UI for this is still not final, we really liked the idea and the look, at least.

While we don't know how heavy the Matrix is on the battery life, Asus says it is working towards adding exploring more use cases like battery indicator and other notifications like email.

If there's anything more we would want to see, then it will be an RGB Anime Matrix, as that will definitely take things to the next level.

The Zephyrus G14 that I tried had a 2560 x 1440p resolution with a 120HZ refresh rate. The 14-inch screen isn't huge by gaming laptop standards, but its thin bezels, vibrant colors, and brightness make up for an excellent display for gamers, creators, or for those who consume visual content. It is also Pantone validated.

The panel also has AMD's adaptive sync technology, which syncs the GPU with the display's refresh rate for smoother image renders. It is something we are looking forward to checking when we get to spend some more time with the laptop.

It offers a 2xUSB 3.2, 2xType-C ports, an HDMI 2.0 port, an audio jack and a Kensington lock slot. It comes with ample connectivity ports and most of them are the latest versions, which is good.

We've been saying this, and one last time that the Zephyrus G14 steals the show with its first of its kind Anime Matrix design. It surely makes it an eye-catching laptop, but that's not all. Asus has literally gone ahead to make the most powerful, compact gaming laptop without compromising on style and substance.

AMD's new Ryzen 4000-series heavy-duty processor, RTX 2060, fast storage, excellent display, and that design makes it one of the most anticipated gaming laptops for this year.