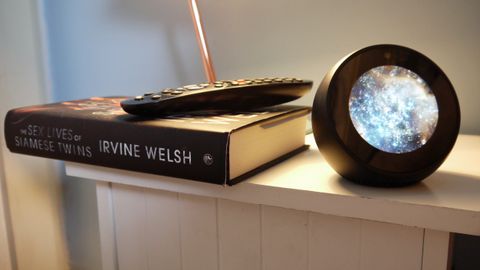 The screen doesn’t add real functionality to the Echo Spot, but it acts as a much needed placebo for a market that isn’t ready for smart speakers. If you’re buying into this market, the Spot is the best smart speaker for beginners.

Amazon wants your home to feel like the deck on the USS Enterprise, the fictional starship from Star Trek. The company's Echo devices, along with the Google Home and Apple's Homepod are the first step Silicon Valley has taken, towards ambient computing.

It all points towards a future where computers are all around you and work without touching screens or pressing buttons. But before we get there, we need screens. And that's why Amazon made the Echo Show and Echo Spot, two Alexa-powered smart speakers with attached screens.

The Spot is Amazon's fourth Echo device in India and it's no coincidence that the company started selling it here weeks after Google announced the Home and Home Mini. The screen makes the Spot undeniably different from the Home and possibly better.

The Echo Spot can do everything the Echo speakers can and adds a visual element to some of the skills. You could call people using the Echo, you can make video calls using the Spot, you could listen to news briefings on the speakers, you can watch news bulletins on the Spot...you get the drift.

The screen makes the Echo Spot more intuitive. When you're shopping, it shows you what you can buy. When you ask for it for news or recipes, the text flows on the screen when available, or videos are played. It displays the name of songs being played and so on.

If you weren't quite comfortable listening to an artificial voice, the screen makes it that much more dependable and easier to use. The screen is touch-enabled of course, so you can swipe through items whenever needed.

The screen actually makes this the best smart home speaker to buy in India right now. Early adopters or otherwise, the screen is a mode of interaction you're used to. It makes it easier to trust the voice-first nature of the Echo Spot.

Over the past week or so, I've realised that the screen is just a placebo. I've done nothing with the Echo Spot that I was doing with my Echo speakers. The Dot and Echo have been on my desk since the day Amazon announced them here.

Sure, I could sit next to the Spot and swipe through a shopping list of items Alexa found, but why wouldn't I just do that with my phone? Similarly, I can read the news on my phone, watch it on one of the many news apps and so on.

The screen makes everything seem easier to use, but it doesn't actually push you to use them. And by its own admission, that's intentional. Amazon wants this to remain a voice-first device, and in doing so, it's retained all the problems that the Echo speakers have. I repeat what I've said in all my smart speaker reviews, it's a device for early adopters who won't mind the fact that it doesn't bring you anything you really "need". Not yet anyway.

Voice calling through the Echo Spot

Enabling voice calls on its Echo range in India gives Amazon a huge advantage over the Google Home. The Echo Spot adds video calling, using a small camera on its front.

As long as your contact is using Alexa, the Echo Spot will make a call to them. It will automatically be set to video if the person on the other end has a video-enabled device, like another Echo Spot, or a phone. Alexa automatically recognises them, making the process quite intuitive.

That said, I noticed that the audio volume is quite low when you're taking calls made through the Echo on your phone. That is if the user on the other end is calling from an Echo Spot. An Echo-to-Echo call is quite clear though.

Can the screen convince you to buy this?

The Spot is also better for first timers since the screen adds a mode of interaction you're more used to. But, that still doesn't mean the Spot will change your life. The novelty might wear off here as fast as it does for the Home and Echo speakers.

Yet, if you're buying a smart speaker, the Echo Spot is certainly the best you have today. The screen makes it easier to trust and calling is finally a feature that makes the Echo useful. The fact that it has an audio jack means I can still make my other speakers voice-enabled with the Spot too. And all that put together makes the Echo Spot the best in India right now.