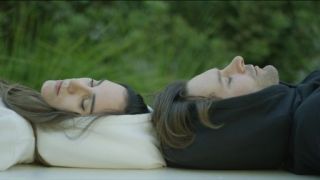 A company that makes a hoodie with an inflatable pillow inside has blown past its Kickstarter goal, indicating that we've indeed reached peak laziness.

The Hypnos Hoodie only needed to raise $30,000 to hit its goal, but backers, some of whom essentially pre-ordered a hoodie with their backing, pushed it to $250,681 in just three days.

The hoodie actually looks pretty stylish, and though the company claims its pillow is discrete when inflated, it definitely makes your head look a few sizes larger. The pillow is sewn into the hood, and users blow into a plug (as one kid in a video states, like you're blowing up a beach ball), to inflate the pillow.

You can lean back and pass out with the hoodie on, and no one would be the wiser you're resting your noggin on a cushy pillow. That is, if they don't see you blowing into your sweatshirt beforehand.

Check it out in the video below: