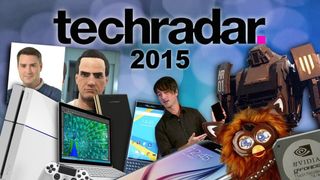 2015 won't be here for much longer, so as the year comes to a close, we decided to look back at some of our favorite articles of the last 365.

Our editors combed through the pages of techradar to bring you the stuff we enjoyed writing the most in 2015. And what a year it was: we tested the latest tablets, interviewed movie directors and went to the first-ever VR film festival. We completed a triathlon (training all the way with tech), asked experts how to make the ultimate PC and discovered that, yes, you can build a real-life Death Star.

It was a huge year for us on social media as well - check out Page 4 for our highlights there.

Thanks for reading, commenting, and following us, and we look forward to hearing from you in 2016!

"The iPad Pro is a divisive tablet. It's just a bigger iPad, which is boring and 'so Apple' to some. To others it's a bigger iPad, and that's simply awesome.

But your affection, desire or interest is purely limited to what you use a laptop or tablet for already. If you're a hardcore laptop fiend, crouching over it at every possibility throughout the day, the iPad Pro is going to have a very different set of criteria to the person who idly uses the tablet around the house and occasionally pulls it out on the train to quickly update documents or fill out a to-do list before work."

"The inspiration for the modularity project came from an unlikely source: a broken camera. The good news was his point-and-shoot was salvageable. The bad news? It would cost more to repair the camera than it would take just to buy a new one.

This dilemma presents the crux of Hakkens' argument with Phonebloks: if tech products are built in such a way so that users could easily and affordably swap out components without any technical know-how, they'd be less likely to resort to tossing them in the garbage."

Fallout 4: the good, the bad and the ugly of the Boston Wastelands

"Above all, Fallout 4 is still a game of exploration. In its opening moments, you'll look around the perfectly normal, pre-nuked house replete with a baby bassinet and servo droid and feel the urge to explore every inch of the gorgeous interior.

This wide-eyed wonder carries with you for much of the game as you delve into numerous caves, subterranean strongholds and derelict subway stations. You'll watch as the world around you changes when [redacted] and your family [redacted] (spoilers, spoilers)."

"'Chewie, we're home' says Harrison Ford's Han Solo in Star Wars: The Force Awakens. The character is ostensibly talking about the Millennium Falcon, but the truth is he's talking about the entire Star Wars franchise, about the original cast, the original ethos and, honestly, he's speaking for the millions of fans who have been waiting impatiently for 30 years for the next true step into a Galaxy far, far away.

Star Wars: The Force Awakens is a terrific film - it is reverent but not deferential to the original trilogy, genuinely funny without feeling the need to be puerile and it oozes the gritty Star Wars universe we know and love from every pore."

Halo 5 multiplayer is anything but spartan

"Sure, it's a bummer to think that I won't be able to relive my foundational memories of the Halo series in this shiny new iteration. But after seeing it first hand, what developer 343 Industries has created in focusing on 100% online multiplayer is remarkable. Frankly, one new approach to online play made for the best time I've had playing Halo online since Invasion in Halo: Reach.

Welcome to Warzone, the brand new player-versus-player-versus-environment-versus-player game mode that can be described as Halo's response to the League of Legends craze. Whether you're (somehow) new to the Halo series or haven't dove in since, say, Halo: Combat Evolved, this is probably where you'll live online when Halo 5 lands, and that's totally OK.

In fact, I already prefer it."