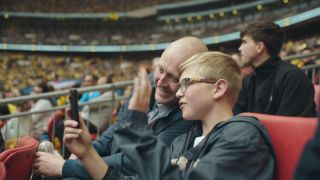 Livestreaming is a great example of how sometimes it takes time for tech to be useful. Back in 2016, livestreaming people falling into puddles was about as good as it got: in the UK, the #drummondpuddlewatch kept the entire nation enthralled, and was the perhaps best thing ever to appear on Periscope.

Now, though, livestreaming is used by celebrities and social media influencers, bands and brands alike.

It’s used for both good and evil; we’ve seen livestreaming used to inform populations about terrible tragedies and to cover important events, but we’ve also seen it used as a propaganda tool by the perpetrators of unspeakable horrors.

And yet it’s still in its infancy.

One of the things that’s kept livestreaming back is the limitations of our phone network; if you don’t have a stable, fast connection then watching livestreams on your smartphone can feel like taking a time machine to the 1990s.

The arrival of 5G promises to bring landline speeds and massive capacity to our mobiles. What does that mean for streaming?

One of the key differences between 5G and 4G is speed. The faster your upload and download speeds, the better quality video you can send and receive – and 5G promises to be a lot faster than even the very best 4G.

In trials, Deutsche Telekom – T-Mobile’s parent company – achieved speeds between 3Gbps and 10Gbps, the equivalent of downloading an entire, uncompressed DVD in four seconds. DT says the average latency in its data network is 50ms; in its very first 5G trials it achieved just 3ms, with further trials taking latency to 1ms.

Of course, it’s important to take speed and latency claims with a big pinch of salt: our 4G phone is technically capable of incredible things but it often struggles to stream Spotify, let alone high-res video, and there are lots of potential bottlenecks between your device and the faraway server you’re connecting to.

In areas of good coverage we can expect very fast connections delivering smooth, high quality video, and in areas of high demand we’ll see less of the signal-degradation that makes it pretty much impossible to stream anything decent from a big gig or sporting event.

That’s good news for streamers and initially at least, terrible news for gig-goers and sports fans. People who previously didn’t bother livestreaming because the quality wasn’t good enough or they couldn’t get a decent connection at all, will become insufferable, holding their iPads aloft when 5G is widespread.

Saying that, 5G could bring interesting things to the events themselves, too.

Even better than the real thing

One of the most exciting applications for 5G is in the live arena, where it has interesting potential benefits for sports, concerts and other big events.

Fancy having your favorite football team stream from its own cameras directly to your phone? Barcelona and Manchester United are already making moves in that direction: the former’s Nou Camp is Europe’s first 5G-enabled stadium, featuring multiple wireless cameras streaming to the 5G network, while Manchester United has been talking to Vodafone about 5G at their stadium, Old Trafford.

Some pundits reckon that such technology will enable us to experience live events in a different way, the cameras streaming over 5G to mission control before the appropriate feed is rebroadcast to our phones. Reports even suggest that Barcelona will have holographic presenters conducting live interviews with players on the pitch.

Just last month, London's Wembley Stadium was the venue for an EE 5G experiment that enabled fans with 5G phones to experience the FA Cup Final in augmented reality.

4G simply can’t cope with that kind of app in big numbers: if you’ve ever tried to do anything online at a big sporting event or gig you’ll be painfully aware of how congested the network can get.

5G should address that, providing enough capacity for fans to experience extra livestreaming content while they’re actually at the event. That could mean switching to a goalie’s-eye view when you’re watching from the stands, or seeing through Matt Bellamy’s eyes when you’re at a Muse gig, (or maybe just streaming something more interesting when a band plays their new album).

Livestreaming to fight the fakes

Livestreaming isn’t just about amusing ourselves. It can inform too – and this is particularly important as we’re moving into an age of deepfakes where the camera definitely does lie.

Livestreaming is at least a temporary solution to that; until the faking tech catches up, we can be reasonably confident that real-time streamed content is the real deal.

5G can also play a key role in providing access to media. By enabling much higher quality connections to people on mobile connections we’ll be able to get contributions from more places and hopefully, from more people.

That’s not just good news for people trying to expose injustice. It’s good for more mundane things too. For example, a primary school will be able to stream the school play so parents who cant leave work don’t need to be there in person.

Everything old is new again

If you’re feeling cynical you might point out that we’ve heard this stuff before: super-powered citizen journalism, rock concerts in VR, even holographic phone calls.

However, the technology is comparable to electric cars, which have been around since 1832 but only really became mainstream in the last couple of years. Sometimes it takes a very long time for the technology to actually deliver on people’s more excitable promises.

We think that’s the case with 5G. In our 3G/4G world, mobile tech doesn’t have the speed, the capacity or the sufficiently low latency to deliver the more excitable and exciting things we’ve been promised.

5G removes those obstacles – and it isn’t happening in isolation, either. As mobile tech gets smarter, what’s possible gets more exciting. Oculus has finally delivered decent cable-free VR. Apple’s working on more AR games and experiences than ever. Even basic smartphones have desktop-class processing and graphics. Combine that with 5G and you’ve got a perfect storm.

It won’t happen overnight. It’ll take time to build out capacity, and to replace our 4G devices with 5G ones. And it’ll take time before we work out exactly what livestreaming on 5G is capable of. We’ll probably start off livestreaming puddles in much higher definition.

However, in the longer term 5G will deliver experiences we haven’t even imagined yet.