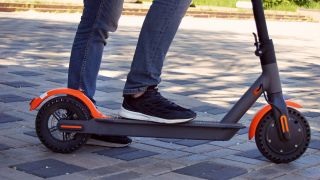 If you live in a city, you’ve probably noticed ranks of pay-to-ride scooters springing up like motorized weeds along the sidewalks, but are they truly practical – and could they even replace your car?

The e-scooter boom was particularly visible at GreenTech Festival in Berlin – a new event dedicated to sustainable technology, and hosted by Formula One world champion Niko Rosberg (a man who, during his career, must have amassed a yeti-sized carbon footprint).

The show floor was populated by electric cars from Tesla and Byton, flying taxis from Ehang and Volocopter, sustainable fashion companies and a business that specializes in tasty snacks made from insect flour. However, the sector with the most booths was last-mile mobility – chiefly e-scooters. Companies including Tier, Flash (now rebranded as Circ), eFloater and Ono all presented their own vision of clean, two-wheeled transport.

“The way people move through cities is changing,” Boris Mittermüller, chief operating officer of Circ told us. “They’re still using cars, but the car is not the best vehicle any more. 70% of cars are single-use – it doesn’t make sense. Car ownership is going down.”

According to Boston Consulting Group, about 35% of all personal trips cover distances of under 3km – a distance that could be walked, but is much faster made by e-scooter. Unlike a bike, a an electric scooter won’t leave you sweaty when you reach your destination, and it’s much cheaper than hailing a ride-sharing service. They’re also easy to ride, and don’t require training or a license.

The appeal is clear, and startups are popping up seemingly overnight to meet demand. Speed is the name of the game: the fastest E-scooters can hit speeds up to 35mph, and the startups supplying them move just as fast. In 2018, Circ was only a glimmer in its founders’ eyes, and at the time we spoke to Mittermüller, its scooters had just clocked up a million rides.

While Lime, Lyft, Uber and Bird battle for top spot in the US market, there isn’t yet a clear market leader in Europe. Circ is making big inroads, though, and hit the million-ride milestone much faster than its competitors on the continent – and it has no intention of hitting the brakes.

"There are a couple of big markets about to open up: Germany and Italy, and hopefully the UK at a certain point this year or early next year," said Mittermüller. "Like most other escooter companies, we’ve seen tremendous growth – but much faster. If you look at growth rates, they are exponential in terms of existing customers and new customers."

E-scooters certainly aren’t for everyone, though – they depend on riders being a certain height, weight, and level of mobility. They’re also not great if you’re carrying anything more than a backpack. Nor can we see them taking off in historic cities with equally historic cobbled streets, and they don’t perform well in rain, ice or extreme heat.

The rules of the road can be problematic too, and vary hugely between countries. Are they suitable for riding on the pavement, or are they restricted to roads? If the latter, do they need to be taxed and insured? Who’s liable in an accident? Should riders wear a helmet, and do they need to provide these themselves?

Then there’s maintenance and waste. Scooter batteries are often non-replacable, which means that when the battery dies, the entire scooter is destined for scrap. That’s before you consider those thrown into rivers, hurled into trees and otherwise trashed.

Not all scooters are created equal though, as the huge range of designs on show at GreenTech Festival showed, and some are more robust than others. The offering from Hamburg-based eFloater was particularly striking – a chunky, three-wheeled design that uses similar self-balancing technology to a Segway.

Circ’s custom-made scooters are also a little different – a fact that Mittermüller says is key to their success. “We firmly believe that a superior scooter will be a huge differentiator, and this is why we build our own vehicles,” he said. “We took the time to build a scooter that is much better than what our rivals have. Those are electrified consumer toys – they’re not comfortable or safe. Our scooter has wider handlebars, a lower center of gravity, is more robust, and has more safety features.”

Mittermüller says the feedback from riders bears this out. Passengers in Paris, for example, have a huge variety of scooters to choose from, but consistently report that Circ’s feel safer and more comfortable.

E-scooters are clearly a winner with riders, but why are there so many startups dropping them onto city streets? It’s partly due to convenience for the founders: starting an e-scooter service has relatively low costs compared to a more ambitious car-sharing service.

“From a tech standpoint, you have technology that is ready for e-mobility,” says Mittermüller. “Strong batteries are available at a reasonable price, and you have IT that is at a stage where you can use it in a robust and reliable way to communicate with the vehicle – to lock and unlock it, and also during the journey. This made us very confident.”

Circ is also looking beyond the scooter to other forms of ‘micro-mobility’, including vehicles capable of carrying cargo and others with a seat. E-scooters are just a convenient entry point.

So could a shared e-scooter replace your car? Potentially, if you live in a city (as two thirds of us are predicted to do by 2050) in an area with reliable public transport for longer journeys, you’re physically capable of riding, and you don’t mind getting damp occasionally.

They’re never going to replace a car if you live further than a couple of miles from a docking point either. Electric car owners might suffer range anxiety if they stray too far from a charger, but e-scooters are on a different level (though at least they can be carried if they run out of juice).

E-scooters aren’t the only option, though: if you’re looking for a zero-emissions option and feeling brave, a French startup is offering pay-as-you-hop pogo sticks to let you bounce around the streets of Paris. Suddenly scooting to work doesn't sound like such a bad idea.